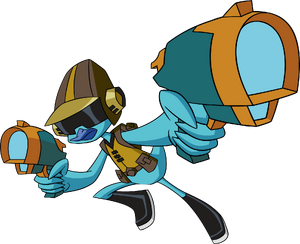 Captain Rad Profit Danger Trouble Dudesman is a character in Omniverse. He first appeared in Have I Got A Deal For You.

A trigger-happy duck because of all the high-powered weapons he has on the "Lovely Duck". He is also has an aggressive personality when someone stops him from shooting his target.

Rad is a jay-like alien with light-blue skin and a blue beak. He wears a beige shirt with three black stripes and a belt with some equipment on it. He has a helmet with an attached black visor.

Rad is extremely skilled with blaster weaponry. While aboard his ship, The Lovely Duck, Rad appears to have a wide arsenal of laser weapons that he can use at any time he wants to shoot.

Retrieved from "https://characters.fandom.com/wiki/Rad_Dudesman?oldid=101152"
Community content is available under CC-BY-SA unless otherwise noted.