She first appeared in the Model Graphix issue, Star Front. During the events of the movie, she becomes second-in-command after Elza/Eluza, and shows to be quite brave and no-nonsense even in the end.

In Star Front, Rabby is the curvy leader of the Solnoid trio featured in the photonovel, and she seems to be quite different from her animated counterpart, as she doesn't seem to be as angsty or bipolar, and in fact even seems to not take things seriously at times. She's also really, really hot.

Rabby has a much larger and more significant role in Eternal Story: she starts as a bridge operator in the Solnoid cruiser Star Leaf, and becomes second in command right after most of the crew is wiped out by a Paranoid ship's volley fire. Due to the chaos ensuing throughout the battle, Rabby shows her first symptoms of bipolar disorder on Rumy, which in turn leads her to not helping her in telling Luffy to not land in the ship, which leads to the sexy Attacker pilot stowing away with them in hyperspace, as they head towards the newly-terraformed world of Chaos in the 9th System.

Rabby is pretty quick in being antagonistic on Luffy after she arrives, bossing her around and all, but it later turns out she's just worried about having someone a hotheaded ace like Luffy around due to the latter's record. Despite this, in the short time they interact with each other, they both grow a deep friendship and Rabby's face when encountering an alpha bitch like her. end up considering each other comrades; this is best show during their engagement with the Paranoids in Alpha-12. After Luffy is seemingly lost in space, Rabby mourns for her while they continue their heading towards Chaos.

During the voyage, the remaining crew is embroiled in the Species Unification Plan, and it is at this point that Rabby begins becoming much more determined in preserving the lives of all the comrades she can, largely motivated by the loss of Luffy and, later, Elza/Eluza, Pony and Catty. During this time, Rabby discovers Catty didn't belong to any unit attached to the ship, and while she initially suspects her to be a Paranoid agent, the young girl's sacrifice leads to Rabby and the remaining crew to respect her afterwards.

After reaching Chaos, the Solnoid trio is confronted by the pursuing Paranoid Axis' flotilla, which uses drones to pursue Patty, who is later revealed to have been impregnated with a new lifeform by the bioweapon that killed Elza/Eluza earlier. Rabby manages to Trans-Mat the lifeform inside Patty, and while she was initially bent on killing it -especially after it escapes into the wilderness and grows at an extremely accelerated rate-, she finally decides not to due to its resemblance to Patty.

At this point, Rabby is starting to suspect the Unification Plan, and her fears are confirmed by the arrival of the Central Guard's fleet and its brutal destruction of both the Akon Kagu'ya battlegroup as well as the Paranoid Axis. Rabby makes the Blossom's computer, Exanon, to spill out what was going on, and discovers the true intent of the Species Unification Plan: she's so pissed at this point, she points a gun to the computer and then trashes it with it. Killing computers with guns is a Gall Force tradition.

In the end, Rabby and Patty hold off the Central Guard ships, while they rig the terraforming devices to destroy the surface of Chaos, taking the Paranoid commander Dorn as well as the Central Guard's ships with them in the process. Rumy and the new lifeform are sent away in a rocket to the neighboring planet, Terra.

In The Revolution, Rabby is much more easy-going and overall level-headed than in the original trilogy, but like her predecessor, she excels in combat, being one of the top aces in the Solnoid East Force. Sadly, her ass is nowhere near as huge as it is in the original saga. Despite that, dat Misato voice of hers and overall charisma make her a very enjoyable protagonist.

She is one of the crewmembers of the East Force cruiser Star Leaf, and like in the original trilogy, stumbles upon Luffy and, while initially antagonistic (to a much lesser degree when compared to Eternal Story) due to them opposing sides, they grow a form of camraderie and friendship, especially after becoming embroiled in the whole Conch affair.

Rabby and her big gun - almost as big as her rack. 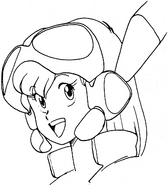 Rabby smiling - could it be that she finally found her mate?

"What are you staring at?" 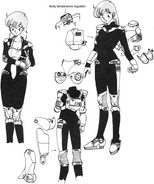 Queen's Blade got nothing on this.

It's really tight for her up there, but she can manage.

It's really tight for her up there, but she can manage 2.