Ma McGraw (mother)
Quick Draw McGraw, or just Quick Draw, is a fictional anthropomorphic horse and the main protagonist and titular character of The Quick Draw McGraw Show. He is depicted as wearing red cowboy hat and blue cowboy scarf. He was voiced by Daws Butler.

Quick Draw was usually depicted as a sheriff in a series of short films set in the Old West. Quick Draw was often accompanied by his deputy, a Mexican burro called Baba Looey (also voiced by Butler) who spoke English with a Mexican accent. In the Spanish American version, Quick Draw (Tiro Loco McGraw) speaks in a very English-influenced accent, and Baba Looey (Pepe Trueno, or Pepe Luis in some episodes) speaks in a very Mexican accent, so it was clear that Quick Draw was the alien, and there was no need to adapt any feature of the story. In the Brazilian version however, Quick Draw speaks in a drawling Portuguese which along with his hispanized name (Pepe Legal) would suggest he was either a Texan-American or Mexican cowboy.

Quick Draw satirized the westerns that were popular among the American public at the time. His character was well-intentioned, but somewhat dim.

Quick Draw was himself a horse caricature who walked on two legs like a human (as did Baba Looey), and had "hands" that were hooves with thumbs and could hold objects such as guns. This did not stop the show's producers from depicting him riding into town on a realistic horse, or, as seen in the show's opening credits, driving a stagecoach pulled by a whole team of realistic horses. This aspect was made light of in the 1980s made-for-television film The Good, the Bad, and Huckleberry Hound, which featured Quick Draw.

In certain cases, Quick Draw would also assume the identity of the masked vigilante El Kabong (a parody of Zorro, known in the Spanish-dubbed version as "El Caba-Zorro"). His introduction went as follows – "Of all the heroes in legend and song, there's none as brave as El Kabong" – As El Kabong, Quick Draw would attack his foes by swooping down on a rope with the onomatopoeiac war cry "OLAYYYYEEEE!" and hitting them on the head with an acoustic guitar (right after shouting "KABOOOOOONG!") which is always referred to as a "kabonger", producing a distinctive kabong sound and usually destroying the guitar in the process. The "guitar" was usually drawn as a four stringed quatro. On the cartoon's soundtrack, the "kabong" sound effect was produced by a foley artist striking the detuned open strings of a cheap acoustic guitar. (Without any of the obvious cartoon theatrics, this would also be reprised by several professional wrestlers, most notably Jeff Jarrett, referred to then either under El Kabong's name or as the "Acoustic Equalizer".) – 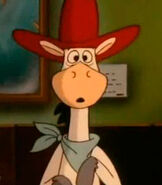 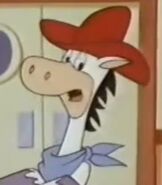