Quackerjack is a villain from the Disney television series Darkwing Duck, and a major rival of a popular video game star, Whiffle Boy. Quackerjack is voiced by Michael Bell and is based off of the Joker.

Quackerjack is one of several characters on the show whose origin episode was shown after he had made several other appearances thanks to the erratic scheduling of the syndicated run. "Whiffle While You Work" was 20th in production order (the first Quackerjack episode by production number) but only aired after his appearances in the episodes "Days of Blunder" and the two "Justice Ducks" episodes.

He was once a toymaker who was run out of business after the "Whiffle Boy" video game market expanded. Understandably, he has a particular hatred of "Whiffle Boy" video games and toys. He became a supervillain who robbed banks to get money to fund his toymaking ventures and uses his toys to aid him for his crimes in most episodes. However, he's a genius who has built many successful toys. His catchphrase is "It's PLAYTIME!"

Quackerjack seems to be influenced by the classic clownish archetype of supervillain that includes the Joker, the Trickster, Punch and Jewelee, the Harlequin, the Prankster, Toyman, and the Clown. He also has a doll named Mr. Banana Brain (a parody of Mr. Potato Head), whom he carries around and talks to. Generally, he adapts a high pitched voice to have the puppet talk back in rhyming form. Other dangerous toys used by Quackerjack are a Giant teddy bear robot which destroyed a "Whiffle Boy" warehouse before self-destructing; a giant "Crying Crissie" doll with which he tried to unsuccessfully flood "Whiffle Boy" town, a pair of robot chattering teeth, a apathetic toy called Mr. Relaxatron and his most fiendish torture device--a talking trivia doll which repeats useless historic facts endlessly over and over.

Most times Quackerjack works alone, but he has been known to team up with Megavolt, and was a member of the Fearsome Five (led by NegaDuck and including Bushroot, Liquidator, and Megavolt). 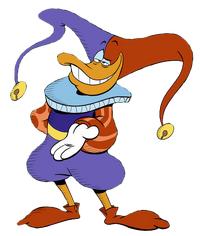 His debut was in "Whiffle While You Work", in which he first met Darkwing Duck and their rivalry was established.

In "The Haunting of Mr. Banana Brain", he stole a haunted Jack-in-the-box that contained a demonic entity named Paddywhack (voiced by the late Phil Hartman), who possessed his doll for a little while, and feeds on the emotion of suffering that he causes others. Quackerjack noticed a change in the voice of his doll (Paddywhack's voice was far deeper than the high pitch Quackerjack used for the doll himself), but seemed unsurprised that the doll was moving and talking under its own power. This means Quackerjack likely is not aware of the doll lacking life of its own (though he seems aware that it is a doll), suggesting insanity and draws a parallel to Batman's almost contemporary villain the Ventriloquist (created in 1988, only three years before Darkwing Duck). In the episode, he was forced to team up with Darkwing Duck to get rid of Paddywhack, or submit to eternal torment specifically designed by Paddywhack with Quackerjack in mind: Paddywhack would fiendishly (from Quackerjack's point-of-view) force Quackerjack to adopt "normal" modes of behavior. This was raucously characterized by the depiction of Quackerjack dressed in a business suit.

In "Toys Czar Us", he forced the manager of a toy store to stock shelves with his personal brand of fun, despite protest.

In "Quack of Ages", he went back in time using his Time Top to eliminate the very first yo-yo. This ended in his accidental aiding of the invention of the yo-yo, thanks to Darkwing.

In "Time and Punishment", he used the top to travel into the future with Megavolt to discover more advanced toys. Thanks to an accidental kidnapping of Gosalyn, he turned Darkwing into the revenge-crazed DarkWarrior Duck.

In "Days of Blunder", Quackerjack posed as a psychiatrist and convinced Darkwing to stop crime fighting so he could freely commit crimes.

He makes a cameo in "Ghoul of My Dreams" in Darkwing's nightmare.

As a member of the Fearsome Five, Quackerjack appeared in the episode "Just Us Justice Ducks".

In "Stressed To Kill", Quackerjack teamed up with Megavolt again, and, using a toy called Mr. Recouncianslaxatron, the two had the city in an apathetic daze as they robbed it blind and caused mass mayhem. Throughout the episode, he constantly annoys Megavolt by calling him "Sparky".

A friendly, more gentle Quackerjack is seen as one of the members of the "Friendly Four" in "Life, the Negaverse and Everything." He's still insane but more docile and actually has somewhat of a conscious, being he still makes toy weaponry but only to use against NegaDuck while he gives normal toys to children.

He briefly appeared as a Fearsome Five member again in the episode "Jail Bird". When NegaDuck stole the powers of the other four members, it was revealed that Quackerjack's superpower was "wackiness" (a euphemism for mania), without which he became depressed and whiny.

Quackerjack's character was revamped. He became more evil after NegaDuck destroyed his Banana Brain doll. He worked for Quackwerks, but then he really snapped after no one would listen to his ideas. He became the leader of the Fearsome Four, destroyed a Crime-bot with his bare hands, and blew up buildings with exploding action figures of himself. After he was carted away to prison, he later escaped and got a device that would turn St. Carnardians into soulless little toys. It is revealed he has a girlfriend named Claire. Darkwing to stop his plan and make him think things through, but Quackerjack escapes and turns himself into a toy at Claire's doorstep.

Like NegaDuck, Quackerjack possess no superhuman abilities, though that makes him no less dangerous than any other villain. While no martial artist, Quackerjack is incredibly athletic, capable of performing perfect backflips and impressive leaps. In fact, his acrobatic affinity and use of lethal gadgets makes him a top tier villain, also, his madness makes him highly unpredictable.

Childish, petty, delusional, and prone to mood swings, Quackerjack is unstable and though usually in a jolly mood, this can quickly change if properly provoked. Despite this madness he is in possession of a keen intellect, though his jester like behavior contradicts this he is able to form semi-coherent plans and set them in motion.

The clearest indication to Quackerjack's insanity is the banana-themed doll with which whom he makes his plans, discuss strategy and conversate with. This doll is real to Quackerjack, the best example being when it was possessed Paddywhack and he didn't as much as flinch when it actually began moving on its own.

In the comics, NegaDuck tore the doll apart and Quackerjack was gravely affected by this, as if the destruction of Mr. Banana Brain also destroyed part of himself in the process, he lost his playful streak. In its place, a devious dedication to right what he deem wrong has grown. 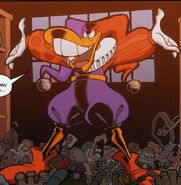