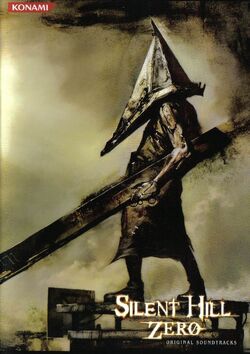 Pyramid Head, also known as Red Pyramid Thing or "Triangle Head" (三角頭, Sankaku Atama) in Japan, is a monster from the survival-horror Silent Hill video game series, published by Konami. Introduced in the 2001 installment Silent Hill 2, he stalks the primary player-character James Sunderland, who comes to the town of Silent Hill after receiving a letter from his deceased wife. The Silent Hill series, particularly the second installment, frequently makes use of psychology and symbolism: Pyramid Head represents James' wish to be punished for his "sins". Masahiro Ito, the designer of Silent Hill 2's monsters, created him with the goal of having "a monster with a hidden face". Known for the large triangular helmet which conceals his head, Pyramid Head lacks a voice, a visible face and reasons for his actions.

He has since appeared in the 2006 film Silent Hill as "Red Pyramid", in the 2007 first-person shooter Silent Hill: The Arcade as a boss (a computer-controlled opponent), and in the sixth installment of the series, Silent Hill Homecoming, as the "Bogeyman". He has also made an appearance outside of the Silent Hill series as a selectable character in the 2008 Nintendo DS title New International Track & Field. Positively received in Silent Hill 2 for his role as an element of James' psyche, he has been cited by reviewers as an iconic villain of the series and part of Silent Hill 2's appeal.

Of the creatures that appear in Silent Hill 2, only Pyramid Head features an "overtly masculine" appearance. He resembles a pale, muscular man covered with a white, blood-soaked robe reminiscent of a butcher's smock. He does not speak, but grunts and moans painfully inside the helmet. His most outstanding feature is a large red, triangular helmet that covers his head completely. Masahiro Ito, the designer of Silent Hill 2's monsters, wanted to create "a monster with a hidden face", which led him to add the pyramid-shaped helmet. According to Ito, the possibility of pain is suggested, because of the triangle's sharp right and acute angles. At times, it appears that Pyramid Head is in pain. His weapons consist of the deadly and heavy Great Knife, which the player can find and use for the rest of the game, and later, a spear.

As revealed by Konami's The Book of Lost Memories, his appearance was a variation of the outfits of the executioners from the fictional history of the town. They wore red hoods and ceremonial robes to make themselves similar to Valtiel, a monster who appears in Silent Hill 3. Pyramid Head was created from "the townspeople's idolatrous ideologies". Like Valtiel, he dresses in gloves and stitched cloth and pursues the game's protagonist. Christophe Gans, the director of the 2006 film adaptation Silent Hill, suggests that he "was one of the executioners in the original history of the town" and that "there is not one particular or exclusive manifestation of him as an entity."

After receiving a letter from his deceased wife, Mary, and arriving in the foggy town of Silent Hill to search for her, the protagonist and primary player-character James Sunderland encounters Pyramid Head several times over the course of the game. He first appears from behind a gate and makes no attempt to attack James. Later in an apartment, James walks in on Pyramid Head's rape and murder of two Mannequins — creatures made of two sets of hips and legs. Terrified and panicked, James hides in a closet and shoots Pyramid Head with a handgun several times, which causes him to leave. James witnesses Pyramid Head's rape and murder of another creature when near a flooded stairway and Pyramid Head attempts to kill him. After a few minutes, sirens sound in the distance and Pyramid Head descends the stairway, removing the water.

James does not meet him again until in Brookhaven Hospital, where Pyramid Head knocks him through a safety railing and he falls, sustaining injuries. Pyramid Head does not pursue or continue the attack. Later, he stalks Maria, James' companion who closely resembles his wife, through a lengthy corridor. As James flees into an elevator, the doors shut before she can join him. He struggles to open the doors to save her, but Pyramid Head kills her. However, in the labyrinth beneath Toluca Prison, James finds her alive and unharmed in a locked cell. Before trying to seduce him, she reminisces about a trip that only he and Mary took to a hotel in Silent Hill. He leaves, promising to find a way to her, and discovers that Pyramid Head walks a corridor nearby, now carrying a spear. James reaches Maria's side of the cell afterwards, but finds her dead. Pyramid Head makes his final appearance just before the final boss, where two Pyramid Heads take part in the encounter. They kill Maria yet again and after pursuing him around the room for a while, both commit suicide.

Pyramid Head makes an appearance in the 2006 film adaptation of Silent Hill as "Red Pyramid" and is portrayed by Roberto Campanella. In the film, the perspective of the female characters shaped the character's physical appearance. Replicating the character's helmet exactly and having the actor move with it on proved to be impractical; Gans noted that despite the name, Pyramid Head actually wore "a basin" instead of a triangle-shaped helmet. Red Pyramid's sword and helmet were constructed out of lightweight material painted to appear heavy. For the role, Campanella wore a "five-part prosthetic"; it took two-and-a-half to three hours to get him into costume and make-up. His boots had a hidden 15-inch (38 cm) sole which made him just under 7 feet (2.1 m) tall. Patrick Tatopoulos, who worked on the make-up effects and monsters, enjoyed the project of designing the character. According to him, Red Pyramid serves as a symbol of the town's darkness and harbinger of its alternate dimension.

A picture of Pyramid Head can be found in the burning Gillespie house. It holds one spear in each hand.

Pyramid Head also appears on the cover of the game's soundtrack.

PlayStation: The Official Magazine revealed that the "famous Pyramid Head makes a significant appearance in Silent Hill Homecoming, but his role is limited to non-interactive scenes." The "Bogeyman", as he is referred to in the game, appears only twice to the game's protagonist Alex Shepherd; once in the Grand Hotel in Silent Hill and much later in a church where he executes Alex's father by splitting him in half. His last appearance is in a possible ending to the game: Alex wakes up in a wheelchair as two Pyramid Heads appear, each with part of a helmet, which they use to turn Alex into one of them. After this ending is played, the player obtains the Bogeyman's costume for Alex to wear. Mindful of Pyramid Head's role in Silent Hill 2, the developers chose to include him as "the embodiment of a myth [that] parents started to keep the children out of trouble" and "the accretion of the activities going on in the town of Shepherd’s Glen."

Pyramid Head appears in the 2007 first-person, two-player shooter Silent Hill: The Arcade as a boss, and as a super-deformed selectable character in the 2008 Nintendo DS title New International Track & Field, an installment of the Track & Field series. He also made a cameo appearance in the 2008 Silent Hill comic book Sinner's Reward, published by IDW Publishing. The writer, Tom Waltz, later said he regretted the cameo, which only functioned as fan service. To him, Pyramid Head is a psychological construct created for James; however, he stated that: "At the same time, I don't think that ruined the comic. Some people really liked it. To some people, Pyramid Head should be in all the stories because they do like him." Additionally, the character was portrayed in the 2009 Silent Hill-themed haunted attraction in Orange County, California, from October 2 to 31.

The Silent Hill series, particularly Silent Hill 2, uses symbolism and psychology; the town of Silent Hill serves as limbo where "the protagonists are inserted into the disorienting nightmare to confront symbols of their inner darkness." The player is left to decide as to whether Silent Hill 2's primary player-character James Sunderland killed his wife, Mary, to end her suffering or out of resentment and frustration for his sexual repression during her three-year-long illness. James knew she had a terminal illness, which has been speculated to be cancer, and often read medical textbooks, searching for something to help her. During her last days alive, she became physically repulsive as a result of the illness and treated James abusively, ordering him to leave one moment and begging him to comfort her the next. The knowledge of her terminal illness caused her to become angry and hurt her loved ones, particularly James, and it pained him to visit her in the hospital. Manifesting as "James' anger and guilt", Pyramid Head functions as an executioner of Maria—a woman who strongly resembles Mary and later revealed to be James' delusion—and his constant tormentor. As a result of her repeated deaths, James re-lives the guilt and suffering that he felt when he killed Mary. Pyramid Head acts as "judgment personified, a sexually dark butcher", and "James' masochistic delusion" which punishes him for his sins. Because of Pyramid Head's role in Silent Hill 2, it has been suggested that his face, which is concealed throughout the Silent Hill series, would resemble James'. Placing Silent Hill 2 in the context of a psychotherapy, Doris C. Rusch suggested that Pyramid Head might stand for a fear of James' because he provokes "fear of confrontation" from James and the player through his violent acts.

Critical reaction to Pyramid Head has been favorable for his creepy appearance and role as an element of James' psyche. Critics cite him as an iconic villain of the Silent Hill series, a favorite among fans, and part of the appeal of Silent Hill 2. GameSpot compared Pyramid Head's appearance to The Texas Chainsaw Massacre's Leatherface and found him the most terrifying monster in Silent Hill 2. Computerworld named Pyramid Head as one of the most terrifying villains in computer and video games. GamesRadar listed him as one of the twenty-five best new characters of the decade and ranked him second on its list of the scariest video game villains, calling him the "most horrifying character ever to have a cult following". The Escapist described him as "one of gaming's most memorable recent antagonists". The scene in which he rapes another monster was noted to be unsettling, since the subject of rape is not often tackled in video games. GamesRadar disliked the final battle with him because of how anti-climactic it was compared to his role throughout the rest of the game. His appearances outside Silent Hill 2 have received mixed critical reaction. Critics generally agreed that Pyramid Head's appearance in Homecoming was more of fan service, though Game Revolution called it "damned effectively-employed". His appearance in New International Track & Field received mixed critical reaction. GameDaily disliked it, finding it awkward that a character like Pyramid Head was competing in sporting events with characters like Frogger and Sparkster, while a critic for The Escapist called it enjoyable and "hilarious". The 2007 Silent Hill: Origins also included a similar monster named "The Butcher", whom the protagonist occasionally encounters killing other monsters.

Retrieved from "https://characters.fandom.com/wiki/Pyramid_Head?oldid=139915"
Community content is available under CC-BY-SA unless otherwise noted.