Puss in Boots is a tritagonist from the Shrek film series and the titular protagonist in Puss in Boots, voiced in English and both Spanish versions by Antonio Banderas. He is based loosely on the fairy tale character of the same name, and is the main "other fairy tale character" in the three sequels. He was introduced in Shrek 2 and speaks with a Spanish accent. 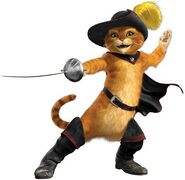 Add a photo to this gallery
Retrieved from "https://characters.fandom.com/wiki/Puss_in_Boots_(DreamWorks)?oldid=141873"
Community content is available under CC-BY-SA unless otherwise noted.