Fictional Characters Wiki
Register
Don't have an account?
Sign In
Advertisement
in: Singers, Child-Abusers, Masters of Disguise,
and 10 more

Tom and Jerry: The Movie

Robyn, Tom and Jerry
Pristine Figg or Aunt Figg (Pristina Gordis in Latin America) is the main antagonist of Tom and Jerry: The Movie.

She is a fat woman who likes to steal money and she "took in" Robyn Starling just for her father's inheritance.

In the film, she took Robyn in after her mother died (though they did not know that her father was alive at first), but calls her orphaned and makes her sleep in the attic. Figg also has a spoiled obese dog named Ferdinand that moves by using a skateboard. After taking in Tom and Jerry, she sees a messy kitchen, blames them, and takes them to Dr. Applecheek. After getting a telogram that informs her that Robyn's father was still alive, Figg wanted to prevent her niece from knowing in order to keep the fortune and not become poor.

Later, after Robyn ran off with Tom and Jerry to find her dad, Figg and Lickboot offered a fake reward of $1 million for anyone that finds her. At the fair, the group of villains went after her, though Figg and Lickboot were still at it. At the cabin, after it was accidentally set on fire, she decided to leave Robyn for dead and run for her life. But she and Lickboot ended up tripped by Fredinand, and fell to boat. Though they managed to went away, the process causes the boat gone haywire as Robyn's dad arrives. The boat moves uncontrollably along the river, leaving their fates unknown.

In the end, Robyn's dad arrives as Figg and Lickboot are marooned on the boat, convincing Robyn Starling to go back to the house where it all ends, with her giving Tom and Jerry their new home. 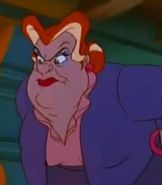