Princess Pea is a character in Super Why

As said, Princess Pea can be stubborn sometimes despite her cuteness and beauty but she's normally a big old sweetie pie! She sometimes lacks faith in herself when trying to do something new or in front of others, but she is always willing to learn how to improve the topic at hand. She'll always comply to an idea if there's a chance that it'll work. Such as when she was nervous and didn't want to perform, after seeing how Molly dealt with the same insecurity, Princess Pea was willing to give the same method a try and managed to succeed! She also puts her desires before thinking, such as when she ate too much food suffered a terrible stomach ache, but still wanted to have some of the popcorn her friend offered. She was perfectly willing to have a worse tummy ache just to eat more food. However, she did realize that by doing so it was just going to cause her more pain so she stopped to think first and then declined the offer. While Little Red Riding Hood is one of her best friends, neither girl is alike. Red is a tomboy who loves to skate, write songs, or play music. While Princess Pea is a very beautiful girly-girl who loves to have tea parties with her other princess friends. But it doesn't mean she won't enjoy a nice sport now and then, or play pirates with the Pig Brothers. Both girls have never got into a fight despite their major differences and even help each other out. Such as Red showing Princess Pea how to tie her skates laces or running in races together. Princess Pea does not think rudely of Red at all, despite their differences in terms of social standing.

Princess Pea is a light brown skinned girl, revealed to be biracial. With brown green eyes and long black curly hair that seems to be a bit waist length with her bangs pulled back other then a few minor strands. On the top of her head is a metallic purple crown with small light blue circled gems or beads adorning the top. Normally Princess Pea wears a black dress with light blue lining/markings, along with a small beaded necklace with a light blue gem in the center. Her feet are only seen when she wears other outfits.

◾"Princess Pea at your service!" ◾"Peas and carrots, carrots and peas, book come out. Please please please!" (PBS Kids Version only) ◾"Oh! Split peas..." ◾"Spectacular spelling!" ◾"Let's take a bow!" ◾"Princess Presto, with spelling power!" ◾"Presto!" ◾"We're in the book (insert book title)" ◾"(Cue the sparkles, Cue the Music) "Princess Presto to the rescue!"(The Cue the sparkles & music phrase is only used in the PBS Kids version, in the syndicated version, the sparkles & music cue immediately when "Princess Presto to the rescue!" is said) ◾"Oh My Peas!" ◾"What letter makes the sound (insert letter sound)?" 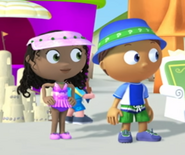 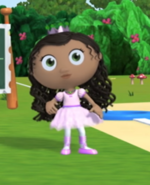 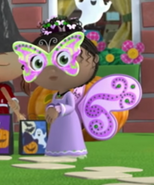 Add a photo to this gallery
Retrieved from "https://characters.fandom.com/wiki/Princess_Pea?oldid=120238"
Community content is available under CC-BY-SA unless otherwise noted.