Enhanced strength
Flower generation
Crystal generation
Princess Daisy is the tomboyish, sugary sweet, regally and unbearably beautiful, very attractive and extremely cute ruler of Sarasaland. She has a fondness for flowers which is shown in some of the games she appears in. She is portrayed as being a cousin of Princess Peach. But despite her being the ruler of Sarasaland, Daisy resides in the Mushroom Kingdom.

Daisy has blue eyes, pale skin, and titian hair. Daisy is sometimes depicted with darker, Titian hair, and tan skin. Additionally, Daisy is described as being very young, and her neotenic features match this description. She has round cheeks, a button nose, thin, nude-colored lips, and large, round eyes with thick, black lashes on the sides. Her hair is long with a flipped style and parted bangs. She has an average weight and height compared to other Mario characters, being shorter than Peach but taller than Luigi, and generally being in the middle of weight classes in the Mario Kart series. 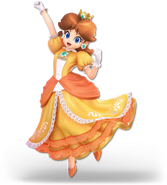