Physical strength
Queen Anna of Arendelle (pronounced Ah-na) is the main protagonist of Disney's Academy Award-winning 2013 animated feature film Frozen and the deuteragonist of its 2019 sequel. She is the younger sister of the powerful Princess Elsa and embarks on a perilous journey to save her kingdom from an eternal winter.

At 18 years old, Anna sports a slender figure and a fair complexion. She has glittering, turquoise blue eyes, rosy cheeks, thin lips, long strawberry blonde hair tied into two braided pigtails, bangs on the right side of her forehead and a dusting of freckles (a trait that she shares with her sister Elsa, even though Elsa appears to have less freckles than Anna does). When she wears sleeveless dresses, it is shown that she has some freckles on her shoulders in addition to the ones on her face. Her face is slightly rounder than Elsa's, but still just as pretty. She also had a platinum blonde streak that matches Elsa's hair color on the right side of her hair, due to an accident in which she was struck by Elsa's magic when she and Elsa were little kids, which disappeared towards the end of the film. All of her outfits have Rosemaling, due to the fact that the movie's setting is in Norway. The winter outfit that Anna acquires at Wandering Oaken's Trading Post & Sauna is a traditional Norwegian clothing called "Bunad", and the design consists of a medium-length, dark blue skirt (consisting of a lavender round-cut lining with points, with each rose and periwinkle print similar to a rose around the skirt on each point, and each periwinkle bush-like print on each of its round edges) with a black bodice with gold trim and green, red, yellow and purple rose prints on it, a light blue long-sleeved blouse, and black heeled leather boots with gold linings and magenta soles. She also wears a magenta bonnet with purple lining, lavender fluff, and matching white print on the back, a pair of blue mittens with navy blue palms, and a detachable magenta cape with a matching cap, purple linings, and small Byzantium tassels on the edge of the cape with a silver brooch consisting of a pair of hearts with gray prints attached to her cape and magenta lipstick. On occasion, she wears a pair of crystal clear ice skates. In her coronation dress, she wears a black sweetheart bodice with off-the-shoulder dark green sleeves and rose, teal, blue and purple prints on it, and has greenish-gold trim, a black satin-laced necklace with a bronze pendant of Arendelle's symbol, an olive drab skirt with sashes (consisting of asparagus centers with pink, crimson, dark olive green, olive drab, and blue prints on it between cream sides), both cream petticoat and bloomers, white stockings, and a pair of black ballet shoes. She wears her hair in a bun, and a part of her hair is braided and used as a headband, a green comb-shaped barrette with a couple satin ribbons (green and green-yellow) attached to the back of her hair, and dark pink lipstick. She also wears a teal cape with a cyan bow as a clasp for the cape, sapphire oval-cut hem with azure line, blue dots on each cut, and small sapphire dots all around the cape. When she is accidentally cursed by Elsa, her hair turns white, almost silvery-looking. After she is thawed, her hair returns to its original state with the platinum blonde streak no more, thanks to Elsa. In her casual attire, her hair is once again in braided pigtails without her streak, and she sports a timber wolf wrist-length blouse with light blue vertical linings, a pinafore dress consisting of both a light gray bodice with green linings, vertical gray hairlines, and four green buttons placed vertically on the bodice with black hairline laces attached, and ark gray skirt with a light gray lining, crimson, green and lavender flower prints all around on it, and lavender, green and olive drab bush-like prints between each flower prints. She also dons a white petticoat, a pair of matching heeled leather boots with gold linings and brown soles, the same color and shape of the brooch, and, on occasion, the same color ice skates.

Unlike her older sister Elsa, Anna is very eccentric, optimistic, energetic, awkward, and far from elegant. She usually acts before she speaks and can be rather impulsive, but holds a lot of innocence to her, nonetheless. She is free-spirited, bent on spending her life outside the castle gates after years of being enclosed within them for the safety of the kingdom due to Elsa's ice powers. Anna is also a pure and hopeless romantic, dreaming of romance the moment the gates are finally opened for Elsa's coronation ceremony. There can also be a little naivety to her, as she believes in marrying someone immediately if the heart tells you so, despite knowing them for merely a day. And though naïve occasionally, Anna is far from weak and is shown to be quite skilled in self-defense, as seen when she and Kristoffsurvived being attacked by the wolves, the fearsome Marshmallow, as well as when she sucker-punches Hans off the ship after the climatic scene in the fjords.

Though she greatly values romance, it is clear that Anna's most valued treasure is her relationship with her sister. Since childhood, Anna has been attached to Elsa and always leaped at the opportunity to spend time with her. As the years passed and the sisters grew apart, the heartbroken Anna continued to try time and time again to spend some quality time with the one she loved most, but due to Elsa's powerful magic, it was deemed too dangerous until, through Anna's loving efforts, Elsa learned to control her icy powers, allowing her to end their "imprisonment" within the castle walls and finally share the quality time they have been longing for years upon years.

Throughout most of the film, Anna is also the only character to express faith that Elsa is no monster. This is in contrast to the Duke of Weselton, who is notably against her because of that very theory, and Kristoff has a somewhat mild fear of what Elsa might do, as do the other citizens for they are totally oblivious to who Elsa truly was. Even so, despite their separation, Anna knows that Elsa is far from vile and takes it upon herself to bring her home, not only for the sake of the kingdom, but in hopes of rekindling their formerly close bond. This is an example of Anna's purely optimistic side and powerful sense of hope, as well as her love for her sister. Another example of this can be seen rather powerfully during her moments with Hans in the library; when Hans announces his plans to kill Elsa, Anna, despite being severely weakened as a result of her frozen heart, responds, "You're no match for Elsa", giving one of the biggest examples of her optimism, loyalty and true love for her sister, despite all the pain and suffering their rift has caused her.

As mentioned above, one of Anna's most striking traits is her eccentric and whimsical personality. She is notably goofy and hyper-active, constantly shown running throughout the castle, bouncing and flipping over furniture and talking to paintings on the walls, though the last habit is due to having no one to communicate with in the castle with Elsa forcibly being locked away in her room. Also, because of her impulsive attitude, she has a tendency to get herself into quite a bit of trouble, such as the moment she provokes Marshmallow, a creature twice her size, without thinking of the consequences.

Despite her optimism, Anna has also struggled with some self-confidence, as she often looks down upon herself and views herself as nothing more than ordinary throughout most of the film, especially compared to Elsa's radiance. It was to the point where she feels she has no one in the world who truly loves her, with Elsa seeming to want nothing to do with her. This would also explain why she is so quick to find romance, as "For the First Time in Forever" would explain that she's looking for someone to act as her companion, no longer wanting to be alone. She also quotes lines such as "It's just me" and "No, I'm completely ordinary", which also indicates her low outlook on herself. In a deleted song called "More Than Just The Spare", Anna sings about her self-worth, which is low in the beginning of the song, but gradually gets bigger.

In the end, despite her numerous flaws, Anna is an extremely sweet, selfless and loving character. Numerous times throughout the film, she puts the safety and well being of others before her own, showing great loyalty and admiration for her friends and family, which is most notably seen with Elsa. Some examples of this can be seen when she purchased the items and food that Kristoff couldn't afford at Wandering Oaken's Trading Post and Sauna, prevented Kristoff from spoiling Olaf's dreams of living in the summer and most significantly and importantly during the climax where she saves Elsa from death at the hands of Hans, despite knowing that she would inevitably lose her life in the process. In terms of personality, all these factors and more, make Anna one of the most diverse Disney characters of all time.

Anna and Elsa began meet and greets at Disneyland as well as Disneyland Paris in the winter; they have been making appearances ahead of their movie's release to theaters. As of now, the sisters are currently doing daily meet-and-greet sessions in the Magic Kingdom's Princess Fairytale Hall. And due to their popularity,FastPass services are available. The princess also appear in Disney Festival of Fantasy Parade, in the same park, with Anna wearing her green coronation gown.

Also, on October 22, 2013, Anna and Elsa began early meet-and-greet sessions at Disney's Hollywood Studios (complete with a mountainous backdrop), though this was only temporary as their current location wasn't completed then.

Anna also makes a few appearances in the Disney California Adventure spectacular, World of Color alongside Olaf, Sven and Kristoff, and later alongside Elsa, in the winter rendition, Winter Dreams. In the 2014 version of the show, Anna plays a larger role, performing "Do You Want to Build a Snowman" and "Love is an Open Door", in addition to making several cameo appearances throughout. In Disneyland Paris, Anna plays a major role in the holiday themed version of Disney Dreams! serving as the co-host with Olaf.

Anna also makes an appearance in the Frozen segment in Celebrate the Magic at the Magic Kingdom.

During the summer of 2014, Anna serves as the hostess of Frozen Summer Fun, alongside Elsa. She's heavily featured in the daily events, including the sing-along stage show, among others, and serves as a "Mistress of Ceremonies"; often kicking off the events before other characters and cast members arrive to further the entertainment.

In Christmas of 2014, Elsa and Anna will begin making appearances at Hong Kong Disneyland, as well as in Tokyo Disneyland for Anna and Elsa's Frozen Fantasy.

Anna without the cape 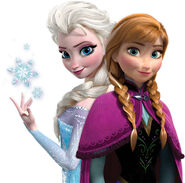 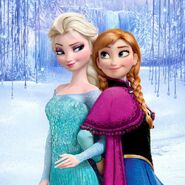 Anna's Frozen Head
Add a photo to this gallery

Retrieved from "https://characters.fandom.com/wiki/Princess_Anna_of_Arendelle?oldid=157521"
Community content is available under CC-BY-SA unless otherwise noted.