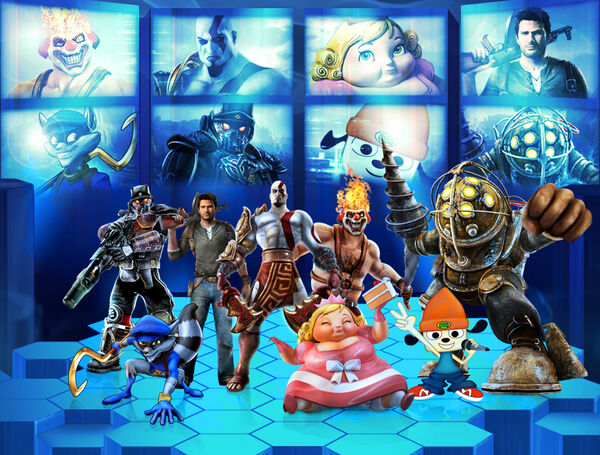 PlayStation All-Stars Battle Royale is an upcoming crossover fighting game which is being developed by SuperBot Entertainment in conjunction with SCE Santa Monica Studio and published by Sony Computer Entertainment for the PlayStation 3 video game console. It was revealed on April 26, 2012 during the GTTV television show.

In Battle Royale, up to four players can battle each other using characters from various PlayStation franchises such as Twisted Metal, Sly Cooper, and PaRappa the Rapper, as well as third-party franchises like BioShock. During the game, players damage other players to receive orbs that build up a power meter at the bottom of the screen. Earning enough power allows players to use one of three levels of super moves which can be used to defeat opponents and earn points. Arenas are also inspired by various PlayStation titles, with some areas mashing up two titles into one (for example, a LittleBigPlanet themed stage which is mixed with Buzz!). The game will feature cross-platform play between the PlayStation 3 and PlayStation Vita versions.

Here is the default control layout for PlayStation All Stars:[1]

Along with the host of varying playable characters, All-Stars also comes with a range of items and levels influenced by various PlayStation franchises. Currently there are four stages confirmed at this time, each based on a combination of two games. Metropolis is based on Ratchet & Clank and God of War, Sandover Village on Jak and Daxter and Hot Shots Golf, Dreamscape on LittleBigPlanet and Buzz!, and Hades on God of War and Patapon. In addition there are also four item pick-ups that have been revealed including the Hedgehog Grenade from Resistance, the Gravity Shield from Wipeout, the RPG-7 from Uncharted, and the Spear of Destiny from God of War.

On May 1, 2012, Sony announced PlayStation Store Royale Contenders Sale, a PlayStation All-Stars Battle Royale sale to celebrate the announcement of the game. The sale includes discounts on titles such as God of War HD, Killzone 3 multiplayer, Sly HD, and more. The sale starts May 2 and runs only for one week.

Retrieved from "https://characters.fandom.com/wiki/PlayStation_All-Stars_Battle_Royale?oldid=41248"
Community content is available under CC-BY-SA unless otherwise noted.