Pikachu (ピカチュウ, Pikachū) is an Electric-type Pokémon introduced in Generation I. Pikachu is famous for being the most well-known and recognizable Pokémon. Over the past years, Pikachu has become so popular that it serves as the Pokémon franchise mascot. It is the Version Mascot for the game Pokémon Yellow. It is also known by the anime, where Satoshi/Ash Ketchum, the protagonist, owns a Pikachu.

Pikachu is a small, chubby, and incredibly cute mouse-like Pokémon which is covered almost completely by yellow fur. It has long yellow ears that are tipped with black. A Pikachu's back has two brown stripes, and its large tail is notable for being shaped like a lightning bolt. On its cheeks are two circle-shaped red pouches used for storing electricity, they turn yellow and spark with electricity when its about to use an Electric attack such as Thunderbolt. A female Pikachu looks almost exactly the same as a male, with the exception of her tail. A female Pikachu's tail is rounded at the end and has an inward dent, giving it the appearance of a heart. This, however, is only true in the Nintendo games. Throught most of the anime and in previous games, female and male Pikachu's look identical. Like Pichu, Pikachu store most of their electricity within the red areas of their cheeks. It can be seen with small surges of electric energy whenever a Pikachu gets protective, mad, etc. When several of these Pokemon gather, their electricity can cause lightening storms.

Pikachu are usually friendly creatures that love to cuddle. They love having their tails rubbed, especially at the base. However if threatened or angered this Pokémon can be quite aggressive. If someone pulls it's tail it will try to bite.

Pikachu's special ability is Static, which can cause paralysis in battle if hit by a physical move. In Pokémon Black and White's Dream World, the Trainer receives a Pikachu with the Lightning rod ability. It is the first member of the Pikachu-family Pokémon.

Pikachu has Ultimate Potential when it comes to battle. If one trainer is lucky enough to obtain a Light Ball, his Pikachu can become very strong. His stats can exceed 400 in Attack and Sp.Attack, and can learn the exclusive electric move, Volt Tackle. With his Potential, he is an excellent Pokémon for any team, especially in competitions. 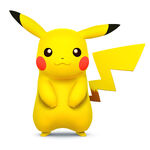 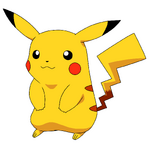 Add a photo to this gallery
Retrieved from "https://characters.fandom.com/wiki/Pikachu?oldid=126214"
Community content is available under CC-BY-SA unless otherwise noted.