This character has been used under the following names below. Navigate using the arrows or by clicking on a name listed on the navigation bar to jump to a specific character name you want to read.
Other characters for {{{Character name}}} | None →
{{{Characters}}}

Philo and Gunge are Marjory the Trash Heap's two rat-like companions on Fraggle Rock. The two live in the garbage pile with Marjory and act as her shills or barkers, announcing her ceremoniously to visiting Fraggles with alternating phrases: "You are in the presence of..." "The all-knowing..." "Trash Heap! Nyaaaah!"

The pair are nearly identical in appearance. However, Gunge is gray and has only one tooth, while Philo is pink and has two teeth. The pair are rarely seen apart, and usually serve minor comic-relief roles; however, they were featured more prominently in a handful of episodes. In "Home Is Where the Trash Is," for example, Philo and Gunge seek their home, and their origins and ties to Marjory are more fully explored. Also, in "Gunge the Great and Glorious," Gunge is accepted by the Doozers as their long-lost king (until a jealous Philo alters the teeth on the ancient portrait).

The duo's famous "Nyaaaah!" came from Richard Hunt, who made up the famous phrase during one of the auditions.

After Fraggle Rock, Philo appeared in the Jim Henson Hour Pitch Reel (where he is "attacked" by Jim Henson when Henson momentarily takes the puppet off Dave Goelz's hand). The Gunge puppet made cameo appearances, with different eyes, in multiple episodes of Dinosaurs, evading consumption by Robbie Sinclair and Roy Hess.

Philo appeared in Mopatop's Shop as Mabel and Magic Teeny and one of the puppets was used in the episode "Rude Dude" as the Toodlepip from Outer Space.

Gunge (taken from The Hub site, mistaking him for Junior Gorg) 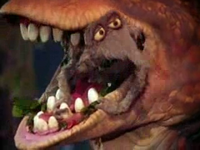 Gunge (as seen in Dinosaurs) 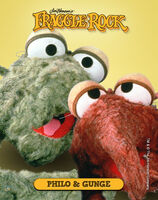 The Philo and Gunge card.
Add a photo to this gallery

Retrieved from "https://characters.fandom.com/wiki/Philo_and_Gunge?oldid=83966"
Community content is available under CC-BY-SA unless otherwise noted.