Pepito is arguably the best supporting character in the Madeline series, and Madeline's next-door neighbor. He is Spanish and has three cousins. He wears a distinctive hat called the “bad hat”. Although he was originally very mean, he has become close with Madeline and they are now good friends. Pepito has often been helpful as well, such as helping to defeat the kidnappers in Madeline: Lost in Paris. However, Pepito often gets into problems as well, such as being trapped with Madeline at the carnival, being depressed during dinner to the point where he becomes sickly thin, and being upset with his cousins. 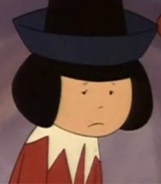