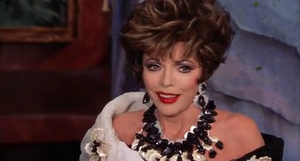 Pearl Slaghoople is a fictional character on the animated TV show The Flintstones. She is the mother of Wilma Flintstone, who is married to Fred Flintstone.

Pearl also appeared in the mid-80s spinoff series The Flintstone Kids, which portrays her husband Ricky for the first time. Ricky also appears in the live-action 2000 film Viva Rock Vegas. Presumably, Ricky died by the time Wilma reached adulthood, as Pearl is stated to be a widow in the original series.[1]

Pearl's last animated appearance to date is in the 1993 animated film The Flintstones: Hollyrock-a-Bye Baby, in which she is voiced by Janet Waldo.

Pearl Slaghoople appears in both live-action adaptations of the series:

Retrieved from "https://characters.fandom.com/wiki/Pearl_Slaghoople?oldid=110774"
Community content is available under CC-BY-SA unless otherwise noted.