Chef John and the two monsters (for Conservations sketch only)

Cookie Monster and his father (for eating preserved cookies off the plate on the MP Conservations sketch)
Pearl is a tan anything muppet monster who made it's debut in season 12 of Sesame Street along with Deena in the cave. Pearl likes piece and quiet, which she doesn't always find due to Deena's infinite energy.

After that season, they both vanished. Somewhere after the 1980's, Pearl was brought back to life as a utility puppet in various sketches and episode scenes therein being performed by various performers such as Noel MacNeal for example. Pearl has been featured on certain sketches such as the friends scene and the birthday celebration scene with Lola and Patrico Borghetti on Plaza Sésamo, Where Did the Tallest Monster Go? sketch (where named Bill), a few Trash Gordon sketches like Conga, M is for Monster, Together We Make Music, My Triangle, Monster Moon Watch, It's Almost Christmas (on Elmo's Christmas Countdown) and on The Cookie Thief special on Sesame Street. It was also an Elmo's World visitor on the Elmo's World episode "Noses" and an dancing audience monster on the resource video "Talk, Read, Write". Sadly, Pearl was never used in episodes of The Furchester Hotel although the other 2 tall monsters are present on the show.

The first design of the monster puppet was re-issued on The Muppets Take Manhattan for the wedding finale while the 2nd revision appeared around the 90's therein being continuously modified on later years. Sometimes, Pearl's given different noses or possibly go noseless.

Compared to Sorbet's old design with the late 2000s design of the puppet, they both resemble each other whereas only he/she doesn't have hairs sticking out and the nose coloring is different. 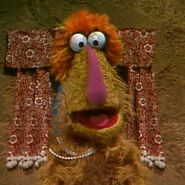 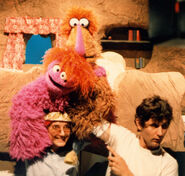 The original Pearl puppet shown on the very left of the screen.

Pearl as shown on the left of the screen in the Monster Moon Watch song.

Pearl is noseless in the Everything's Coming Up Noses song.

Pearl doesn't know the reason why Gordon turned off the Conga music.

Pearl's size compared to Sorbet and Kermit are different which he is the smallest.

Pearl pops up from below the screen and surprises Grover that he's the tall monster (which is only the shortest).

Pearl and Lola cheer at Juan Patricio Borghetti for the breaking the pinata with the bat.

Pearl, Lola and Juan Patricio Borghetti Imérito do the oonga boonga together.

Pearl and Lola count how many times they both tilt his head.

The frosting goes on his face after taking several bites of the cake with the behavior like Cookie Monster.

Pearl goes back to arguing with another monster friend after Lola and Elmo have failed to teach them how to be friends.

Pearl, the unknown monster and Pancho Contreras tilt their heads with the music that he turned on.

Big Bird and Suffy examining Pearl's features including his goatee under his chin.

Pearl dancing with a grey monster in the "K is for Kindness" music video.