Patrick Hockstetter is a major antagonist in Stephen King's book It. He is a member of the Bowers Gang.

Patrick does not appear in the 1990 miniseries (although the character Victor Criss, another bully, is mistakenly named "Patrick" in the credits), but he appears in the 2017 film adaptation.

He was portrayed by Owen Teague in the film.

Patrick was a deeply disturbed young man who fell under the illusion that he was the only real human being in the world (solipsism). He expresses this delusion when he kills his baby brother, Avery, at the age of five out of the fear of being replaced.

As a child, Patrick and his family go swimming in a lake, and he develops a fear of leeches after several of them attach themselves to him.

As a student attending Derry Elementary School, Patrick develops a reputation for being creepy due to his habit of keeping dead flies in his pencil box, and female students stop sitting in front of him due to his tendency of groping them.

Patrick, deeply sadistic, kept the corpses of animals he killed in a refrigerator down at the junkyard, the animals being strays or pets stolen from people's homes that he starved to death in the fridge for both his own amusement and sexual gratification.

It is implied that It uses its powers to prevent people from discovering the fridge, as the day Patrick found it in the town junkyard was the day Georgie Denbrough was killed by It.

Some time before the events of the July of 1958, Henry Bowers finds out about the fridge and the animals.

Patrick is present when Henry breaks Eddie Kaspbrak's arm, and he spits in the latter's face when he is on the ground in pain.

Henry then threatens to tell the police about Patrick's animals if the latter tells anyone about their sexual encounter and leaves.

Patrick, now spooked that Henry may really get the police after him, goes down to the fridge to dispose of the animals and clean it out, but is attacked by IT in the form of flying leeches once he opens the fridge, his worst (and likely only) fear.

Because of the attack, Patrick passes out from blood loss, and he wakes up in the sewers, the last thing he sees being Pennywise eating him.

When the Losers Club enters the sewers, they find what's left of Patrick's corpse.

In 1985, Patrick Hockstetter appears as one of It's manifestations to frighten Eddie Kaspbrak. When the Losers Club enters the sewers again, they find Patrick's corpse for the second time.

In the 2017 film, Patrick's character is considerably changed from the source material.

Patrick is seen harassing several of the Losers Club with the rest of the Bowers Gang, and he is present to see Henry attempt to carve his own name in Ben Hanscom's gut, intimidating the latter with a makeshift flamethrower.

After Ben escapes, Patrick enters a sewer, thinking that Ben is in there. However, It appears in the form of dead children and frightens Patrick, causing him to try and run away. However, Pennywise traps Patrick in the sewers and eats him. A missing persons poster is seen for Patrick on a telephone pole in Derry shortly after.

Some time later, It uses Patrick's voice as one of the many voices calling up to Beverly Marsh from her apartment's bathroom sink, and he appears on a television screen alongside Pennywise and other victims of the latter, all of them chanting "KILL! THEM! ALL!" as Henry Bowers murders his abusive dad, Butch.

Patrick was a very insane, disturbed, and psychopathic person who had a solipsistic worldview and believed himself to be the only "real" being, considering everything except him to not be real, explaining why he does not feel fear or pain.

Despite thinking "real" does not exist apart from himself, he does have a vague concept of rules and breaking them. For Patrick, it is not breaking the rules that is bad, but it is bad being caught doing so.

His report cards show him as being a temperamental, emotionless, and apathetic student, and though his IQ tests show him to have an intelligence slightly under the average, he is described as "far more clever than his lackluster IQ results indicated". 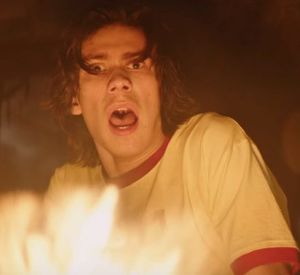 Patrick's death.
Add a photo to this gallery

"I hear you, tits. Don't think you can stay down here all damn day."

Retrieved from "https://characters.fandom.com/wiki/Patrick_Hockstetter?oldid=78945"
Community content is available under CC-BY-SA unless otherwise noted.