Magic
Orko is a fictional character from the Masters of the Universe franchise. He was not part of the original toy collection on which the show is based but, when he was created by the show's writers as comic relief, a toy figure of him was then manufactured. Orko appears in the 1980s Filmation series He-Man and the Masters of the Universe and in the 2002 remake of the series. The character was named Gorpo in the early original series drafts, and that name was still used in the Brazilian Portuguese dub of the original series, but he was renamed Orko.

Orko is a "Trollan", a race of beings from Trolla, a world in another dimension. Trollans wear red robes, red hats, and hide their faces beneath hats and behind scarves. In Trollan society, showing one's face to each other is considered an intimate act, similar to humans sharing a kiss. A production drawing of Orko without his hat, showed him resembling little blue elf, but it was never used in the series. Orko does reveal his face in the episode "Dawn of Dragoon", but his face is not visible to the audience, though his shadow indicates he is bald. Trollans appear to be blue-skinned humanoids with pointy ears. However, their feet remain hidden under their robes. Trollans have natural magical abilities, including levitation, which they use exclusively instead of walking. In one episode, Orko temporarily loses the power of levitation, and can be seen crawling around on his knees. Still, some Trollans have greater magical power than others; Orko's uncle, for example, is a noted magician. Orko is one of three people that know He-Man's true identity.

Orko has always had trouble with his magical powers. A recurring joke in the series is that almost every time he tries to use magic, it backfires in some amusing way. The reason for this is not clear; in one episode, it is suggested that Trolla operates with natural laws that are the opposite of Eternia's, and that in Trolla, Orko was a good magician. However, in later episodes this is contradicted, and Orko is shown to be equally incompetent even on Trolla. Another episode indicates that Orko possessed a magical pendant that allowed him to use magic correctly, but that he later lost it. The amulet later turned up stuck on the back of a dinosaur resurrected by Skeletor. When Orko got back the amulet to erase the happening events, it goes back on the dinosaur before it all happens.

In addition to his magic spells, Orko also stores a plethora of items, some useful, some not-so-useful, inside his hat. The sheer number of things he stores inside the hat is impossibly great, suggesting that the hat itself is a bag of holding under some kind of magic spell.

Orko came to Eternia when a "cosmic storm" accidentally transported him there. He appeared in the Tar Swamps, where he found a young Prince Adam and his pet, Cringer, at the time a tiger cub, and saved them both from dying in the tar. However, he lost his pendant in the process after colliding with a tree.

Stuck on Eternia, Orko was made Royal Buffoon by the King of Eternia in gratitude for having saved his son. Orko became one of Adam's closest friends; in fact, Orko knows that Adam is secretly He-Man, although it is never revealed how he found out. However, Orko frequently annoys Man-At-Arms, due to his magic constantly backfiring or Orko coming into his lab unexpected and uninvited and messing with his equipment, which gets on Man-At-Arm's nerves rather than amusing him as it does others. Orko has proven to be a good friend and a valuable ally, despite his unpredictable powers and the fact he is more than a little clueless. Sometimes Orko wonders how useful he is to He-Man, but despite his apparent cowardliness, he never fails to help those in need. Also, throughout the series, Adam/He-Man is constantly in Orko's debt for saving his life when he was a child. On two occasions, He-Man has helped Orko regain his magical powers.

Orko returns to Trolla, with the help of others, on a number of occasions. The first time, he helps He-Man save the life of several Trollans captured by a humanoid dragon called The Dragoon, and begins a romance with a Trollan girl named Dree Elle. However, he decides that his place is now on Eternia, and so he returns there. However, he still occasionally visits his friends and relatives on Trolla.

In the 2002 series, Orko is essentially the same with a slightly more elaborate costume. It is revealed that he and Cringer followed Prince Adam to Castle Grayskull and watched him transform into He-Man for the first time. Orko then follows He-Man and the new Battle Cat into battle and almost reveals He-Man's identity to Teela and the other Masters, despite having been warned by both the Sorceress and He-Man not to. Fortunately, Man-At-Arms, who recognizes He-Man as the alter ego of Adam, quickly steps in and stops him, informing Teela and the other Masters that the new hero is He-Man and that the Sorceress had told him of He-Man's coming beforehand. In this series Orko was a very powerful wizard but when he came to Eternia and saved Prince Adam, he lost his wand, which was needed to control his magic. A flashback episode, "The Power of Grayskull", which reveals the history of Adam's ancestor King Grayskull, going on a quest for power to defend Eternia, and Grayskull encountered an Oracle who looked and sounded much like Orko, suggesting that other Trollans might have found their way to Eternia. 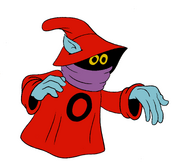 Other members of Orko's race who have appeared in the Masters of the Universe shows include: