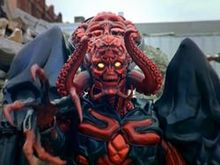 Octomus is the most feared being in the magical world, and for good reason. He is a sanguinary, sadistic, aggressive, murderous, monster of a demon who takes pleasure in torturing his victims mentally and physically. He is shown to be arrogant, traitorous, and manipulative, as he boasted about his power to the Mystic Mother. He is proven to be unsympathetic, remorseless, and inhumane, as he turned the world into an alternate reality apocalypse without a twinge of regret. He has no sense of humour or even comedy added to him which only makes him more menacing. He was free of cowardice while his arrogance boosted his "belief " that he was the most powerful being on earth. However, when he was moments from his death, he was shown to be scared, petrified, and apprehensive, as he screamed at the rangers to stop overloading their magic at him.

Retrieved from "https://characters.fandom.com/wiki/Octomus_the_Master?oldid=78778"
Community content is available under CC-BY-SA unless otherwise noted.