Fictional Characters Wiki
Register
Don't have an account?
Sign In
Advertisement
in: Pages that are underlinked, Star Wars characters, Heroes,
and 14 more

Not much is known of Kenobi's origins other than that he was an apprentice to Master Qui-Gon Jinn. Kenobi first appears in Phantom Menace, where he helps protect Queen Amidala and discovers Anakin Skywalker. Obi-Wan and Qui-Gon engage the Sith Lord Darth Maul in a light saber duel, resulting in Kenobi being the sole survivor.

Kenobi takes on Anakin Skywalker as his student, but Skywalker grows into an arrogant and emotional young man. Kenobi investigates a clone army that has been created to serve the Republic, leading to the Clone Wars.

Obi-Wan serves as a general and member of the Council during this time.

Revenge of the Sith

Anakin eventually falls to the dark side and the Jedi are all but destroyed. As one of the few survivors, Kenobi attempts to kill his former student but cannot bring himself to do it. Instead he takes Skywalker's newborn son and retreats to Tatooine, promising Padme he will watch over Luke.

Kenobi keeps his word for several years, until Luke's aunt and uncle are murdered by the Empire. Obi-Wan trains Luke to become a Jedi as they become involved with the Rebel Alliance. Hiring Han Solo and Chewbacca to help them, Kenobi and Skywalker travel to the Death Star to rescue Princess Leia, an influential figure of the Rebellion and Luke's twin sister. Kenobi engages Darth Vader in one final duel, allowing Luke and the others to escape. Kenobi is struck down by Vader and becomes one with the Force. He later appears as a ghost to help guide Luke in his training. 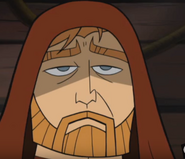