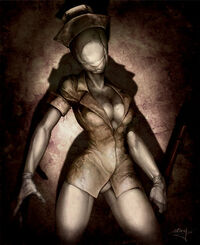 The Nurse is a recurring type of monster and a staple of the Silent Hill series, making appearances of one sort or another in all of the titles. They are visually similar across the series, sharing many common traits, with only the original Silent Hill as an exception due to then-unestablished continuity that becomes more defined in Silent Hill 2 and Silent Hill 4: The Room, whose monster's appearance is different, but nurse-like none the less.

In the Silent Hill franchise, monsters are manifested by the town of Silent Hill, which acts as a mirror of individuals' anxieties and fears. Due to the recurring themes of hospitalization, insanity, and death, each game features, at some point, a trip to one of Silent Hill's two hospitals, Alchemilla Hospital (which houses the town's emergency room) in Old Silent Hill and/or Brookhaven Hospital (which houses long-term patients and the mentally ill) in South Vale. Invariably, once inside the hospital, the player will encounter monsters manifested by the town which resemble deformed nurses.

The Nurses in general share many common traits across the entire series, with a few alterations both large and small that reflect the mentality and personality traits of the protagonist, (and in some cases, such as the original Silent Hill, the antagonist). Generally these monsters wear uniforms that reflect those of contemporary nurses, though in the first game the Nurses wear a much older form of attire, such as cardigans, rather than modern day scrubs.

In the original Silent Hill they are called the Puppet Nurses. They are dark or blond-haired women, and are seen wearing blue or green cardigans and white blouses with matching skirts, to resemble the attire worn by nurses before the adoption of scrubs. It is thought that they are the nurses who worked at Alchemilla Hospital, but became controlled by parasites (the same parasite that later attacks Cybil Bennett) due to Alessa Gillespie's powers, giving them a humpbacked appearance. They carry scalpels which they use to attack the player. They also have a male counterpart, Puppet Doctors, who appear in this game only.

These monsters are created from Alessa's memories of her hospitalization and of the nurses that worked there, including Lisa Garland. Although they weren't necessarily members themselves, they were acting as puppets of the Order by keeping her alive.

The nurses of Silent Hill 2 are called Bubble Head Nurses, and are manifested from the mind of protagonist James Sunderland, combining his anxieties surrounding his wife's terminal illness and the sexual deprivation that came with it. Here, the nurses wear low-cut blouses with the first several buttons undone to display their breasts; their heads face backwards and are swollen and bloated, and they twitch and convulse violently, as if about to burst. They attack with melee weapons, and will swarm James if he finds himself trapped in an area with several of them. It is here that the Nurses obtain their trademark character designs.

The Bubble Head Nurse is a result of severe anxiety in James over his wife Mary's terminal illness, along with the sexual deprivation that resulted and James' difficulty in dealing with both. The highly sexualized figures of the nurses are created to further James' anxiety.

Unlike in Silent Hill 2, the nurse creatures in Silent Hill 3 have a more "human"-like appearance, despite the fact that their faces are still rather distorted and deformed. It appears as though they have either coughed up blood or have been feeding on a bloody carcass, as blood is visibly splattered all around their mouths. Their hair is all uniformly cut into black bob cuts and they share the Bubble Head Nurses' busty appearance. They make heavy panting noises and, when injured, they utter bloodcurdling screams. They carry weapons as well, either the steel pipe or revolvers. If the Perfume is equipped while in the hospital, then they will attack in much greater numbers.

They are generally more dangerous than other creatures at the time, particularly those with the handgun. Those armed with pipes swing away at Heather Mason when she comes close enough, limping towards her until they're in range. Those with revolvers should be dealt with immediately, as they can attack from quite a ways away and deal a large amount of damage.

In Silent Hill 3, the nurses are manifested from the mind of the protagonist, Heather, who is in actuality the now-grown Alessa Gillespie; as such, like the first Silent Hill, the nurses' appearance here comes from Heather's hatred of hospitals and her memories of her painful hospitalization.

The Patient is a type of enemy found in Silent Hill 4: The Room. They are large humanoid, nurse-like creatures, standing well over six feet in height and towering over Henry Towshend. They have mottled grey skin with chunks missing from their bodies and wear bloody grey hospital gowns as well. They move very fluidly and lack the twitching movements common to nurses, and are considered by many to be unrelated to nurses. They always wield pipes in their hands, with which they use to attack victims. Normally they make low-pitched breathing and growling noises, and when struck they make grunts that sound very much like belching.

They are large, menacing opponents that attack relentlessly but slowly. They deal large amounts of damage and take an impressive amount of punishment as well. However, they are easily interrupted and can be defeated without much effort (but plenty of time) by a constant flurry of blows. They often appear in groups of two or more, making it much more difficult to defeat them. The rusty axe is the recommended method of dealing with them.

The Patients are manifestations of Walter Sullivan's aversion to hospitals and the like, finding them terrifying as the Patients themselves are imposing. Also the bloodstains on their hospital gowns makes it seems as though they are bleeding from where their wombs should be, suggesting that they are a manifestation of Walter's hatred for his biological mother; their belching upon being hit could allude to Walter's disgust of these representations. In the hospital world, Walter is seen disemboweling one by a horrified Henry, supporting the idea that Walter hates them.

The Faceless Nurses found in Silent Hill: Origins are nearly identical to the Bubble Head Nurses, although their heads face the right way and do not twitch; additionally, they wear surgical gloves, and appear to have surgical masks made of flesh fused to their faces. They vary in two colors; a red/flesh-like version in the Hospital and a green version in the Sanitarium, but there is otherwise no known difference between them. They attack with syringes.

The nurses in Silent Hill: The Arcade have a appearance similar to those found in Silent Hill 3, but their faces are bandaged up completely and they now have well-groomed shoulder-length hair. They seem to carry either a steel pipe or a pistol, and they move in odd, bounding strides.

In Silent Hill Homecoming, nurses feature in a number of different locations. They are identical to the nurses found in the film adaptation, both in appearance and in their movements, and react similarly to Alex Shepherd's flashlight and loud noises, being instantly drawn to them. They are commonly encountered in groups and attack with much ferocity using long knives.

n this game, they represent Alex's institutionalization in the hospital and his suppressed libido. More than this, however, they seem to be a nod to the films or Silent Hill 2. In the game, there are hints that Alex believed that the nurses in the military were overly sexualized to comfort the wounded soldiers (Alex also states this in his diary).

Another interesting aspect becomes apparent when these nurses are near an alternate source of light and the outline of a fetus can be seen in their abdomens, suggesting that they're pregnant. This is likely a reference to the re-birthing of Alex's brother.

The nurses appear in Silent Hill: The Escape to try to kill the player before he/she escapes. They carry no weapons, and simply touching the player will kill him/her. They can be be killed if shot in their weak spot. Appearance-wise, they seem to be based off the film and/or Homecoming nurse, as they are extremely busty and sexualized. However, they also have traits from the Bubble Head Nurse, as they wear gloves that show their apparently fused fingers.

There are no Nurses in the game, in fact, the only monsters appearing throughout are the Raw Shocks. However, depending on the actions and decisions of the player, the Raw Shocks go on to adopt one of four distinct mutations, each of which is representative of Harry Mason and the ending that will be attained by the end of the game. One of these is the feminine version, whereupon Raw Shocks mutate into distinctively feminine creatures with ample curves and an overall body reminiscent of the sexually-appealing Nurses from past games.

The nurses, known here as Dark Nurses, make an appearance in the Silent Hill movie towards the ending. These nurses take a similar appearance to the Bubble Head Nurse, appearing in low-cut tops and short skirts, their faces deformed and twisted, but facing in the right direction. In Brookhaven's basement, they are huddled in a group, frozen in place in bent and strange positions, each clutching a weapon, such as a pipe or knife.

Rose Da Silva shines her light toward them, causing them to twitch and stomp in suit, forming rows facing her, as if in an army. They begin to shuffle toward her, bending backwards and sideways, making sickly crackling sounds as they move. Rose then turns off her light, realizing that is what attracts them, causing them to freeze in place yet again. She creeps toward them, sneaking through the group of creatures, but is found out. One particular blade-wielding nurse lashes out, missing Rose and cutting the throat of a nurse nearby. The nurse continues to turn in circles, slashing blindly and violently, taking out others around her. Rose takes the chance to escape, leaving her light switched on upon the ground, diverting the creatures' attention.

The movie nurses likely represent Alessa Gillespie's twisted view of her own nurse.