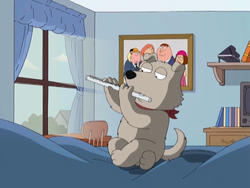 New Brian is a minor character that appeared in the Family Guy episode "The Man with Two Brians". He intended to replace Brian Griffin as he was getting too old, according to Lois. After he was adopted, most of the family warmed up to him. Stewie, however, didn't like the dog's constant cheerfulness, so he tried to get Brian back, but to no avail. New Brian met his end after he hinted that he humped Stewie's teddy bear, Rupert, prompting Stewie to mutilate him and dump his remains in the garbage, leaving a forged suicide note behind. Soon after, the Griffins welcomed Brian back.

New Brian would later appear as a ghost in the mobile game Family Guy: The Quest for Stuff.

He is voiced by Family Guy writer and actor/comedian John Viener.