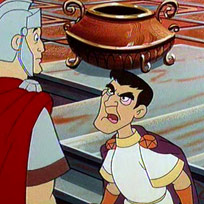 Emperor Nero is the main antagonist of the Christian television series The Story Keepers. A short man with a God complex, he attempted to purge his fair city of the Christians and be worshiped as a god.

In the series, it supports the idea that Nero caused Rome to burn on July 18, 64 AD, and blamed the developing Christians for the fire because they told him that there was a king higher than him. He was also slightly incompetent and gullible as he never suspected Benjamin bar Simeon, his favorite baker, of being a Christian. When Benjamin confessed to being a Christian, Nero claimed to have known this all along and he sentences him to be crucified. He was also very short-tempered as shown when his centurion Nihilus failed once again to catch Benjamin and his group and sentences him to be crucified. However, Nihilus flees before they could execute him. Nero was voiced by the famous English actor Tim Curry.

If you had already guessed already, Nero was a very egotistical person. One of his main goals was to be worshiped as a god and he started the Great Fire because he couldn't live with the possibility that there was perhaps a king far greater than he would ever be. For his birthday, his main wish was to be treated as a god just to drive the point home that he had a very large God-complex. He also loved singing and playing his lyre, even though he wasn't particularly good in either field. He was also very intolerant of failure as shown when he was ready to execute his centurion when his patience wore thin with him. He acts like a little child when he doesn't get his way, and is also shown having Sinus problems.

Retrieved from "https://characters.fandom.com/wiki/Nero_(The_Storykeepers)?oldid=78491"
Community content is available under CC-BY-SA unless otherwise noted.