"Don't blame yourself. From the very first day, I knew I'd do anything for you."
Nathalie Sancoeur, known as Mayura, is the secondary antagonist of Miraculous: Tales of Ladybug & Cat Noir.

She helps Gabriel with his business.

She takes her job seriously, and is very strict with Adrien.

As a result, she wears a brooch known as the Peacock Miraculous, which when worn grant Nathalie the ability to transform into Mayura, her supervillian alias.

As the holder of a Miraculous, Nathalie is assisted by a small blue creature resembling a peacock called Duusu, who is a magical being known as a Kwami. As Mayura, Nathalie's signature ability is emotion.

She works as Gabriel's assistant, also helping Adrien with his schedule. 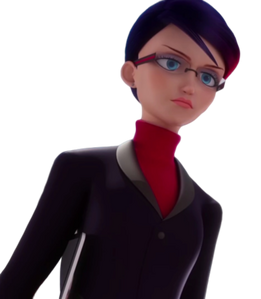