Short teenage girl, a short and chubby with blonde hair styled into dreadlocks with some strands dyed strong malachite green, vivid cornflower blue, and brilliant rose, a dreadlock on the left side of her head has a purple cat bead; another dreadlock on her right side, brown eyes, pale magenta lipstick, a pink bandana to hold her hair back, a necklace with a stone pendant, a blue T-shirt with a white silhouette design on the front of a pigeon holding a olive tree branch with 3 leaves, which is underneath an grayish lime green hoodie jacket, there are pins attached to her jacket on the right side, a daisy pin; on the left side, a ladybug pin, a panda pin and a yellow and green pin, a moderate tangelo jean shorts, brown leggings and dark purple and white sneakers

Help Ladybug and Cat Noir defeat Hawk Moth and his akumatized villains
To make people feel her fear (as Horrificator)
To wants to learn the secrets that Marinette is keeping from them so that they can be friends again (failed; as Horrificator)

"You are suggesting we run, Officer Jones? After it devoured my family, my friends, even my beloved dog, Sniffles? Never! I won't run! I no longer fear it, I'm going to face it, then I'll-WAAUGH!"
Mylène Haprèle, known as Polymouse is one of the supporting characters of Miraculous: Tales of Ladybug & Cat Noir.

She is dating Ivan.

In "Horrificator", she is corrupted by Hawk Moth into the titular supervillain that grows more powerful the more feared she is.

In "Mega Leech", Ladybug gives the Mouse Miraculous to Myléne to help defeat André Bourgeois, who has been transformed by Hawk Moth into Malediktator again. She meet Mullo, the mouse kwami, and transforms into Polymouse for the first time.

Mylène is a meek and cordial girl. Although she tries to be brave, she is easily frightened by anything that she sees as scary, which she is ashamed of and even cries about in "Horrificator". She also is sensitive to being made fun of and is hurt by Chloé's mean remarks about her. She appreciates kindness, and she speaks very fondly of those she loves. According to Marinette in the webisode with the same name, Mylène always tries to look for the best in people.

As Horrificator, she relishes in making everyone scared (as opposed to her being scared). Aggressive and menacing, she attacks everyone and doesn't like it if any of them aren't freaked out by her. Despite this, she retains her feelings towards Ivan and refuses to harm him. When she is calmed down, by the song Smelly Wolf, her bravado and confidence are gone, leaving her terrified by the others and running into Ivan's arm for comfort and protection.

As a result, she is given a pendant necklace known as the Mouse Miraculous.

As the holder of a Miraculous, Mylène is assisted by a small grey creature resembling a mouse called Mullo who is a magical being known as a Kwami. 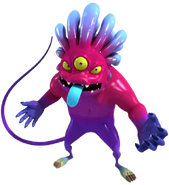