The 'Mouse King is the main antagonist in Barbie in the Nutcracker. He is the film's main villain who first appears in Clara's parlor.

The Mouse King (before he became a king, of course) was the royal advisor to Prince Eric's father. When the King died, he left his magic sceptre to the Mouse until his son was fit to rule. Unfortunately, the Mouse took a liking to his new status and turned the Prince into a nutcracker. He arrives in Clara's parlour to finish him off. Clara manages to save her Nutcracker, but not before the Mouse King shrinks her. As the two of them enter Parthenia on their search for the Sugar Plum Princess, the Mouse King tries to stop them at every turn. With the help of his spy, Pimm, he sends out rock giants and decoy castles.

The Mouse King and the Nutcracker eventually fight again, but the tyrant loses by being shrunk to the size of a actual mouse after a shrinking spell cast he cast is reflected back on him, forcing him to flee into the sewers. However, still eager for revenge, he snatches the locket Clara wore and opens it, sending her home, but is afterwards knocked to the ground after Pimm (whom he is riding on) is knocked out by a snowball.

The Mouse King is the most powerful citizen in Parthenia and he knows it. He uses his power solely to please himself and shows no regard for the citizens under his reign. In fact, he doesn't even think he needs them; he lets his army use their homes as a food source and actually tells the Nutcracker he doesn't need their loyalty. A lot of the Mouse's power comes from the fact that he has an army, a magic sceptre and a spy who can tell him what's going on in the kingdom. Because of this, most people live in fear of him and avoid his army.

Major Mint and Captain Candy - the only people who seem to be trying to defeat him before the Nutcracker and Clara's arrival - are dismissed as "gullible idiots", so they clearly aren't much of a threat to him. The Nutcracker is a tougher opponent; although the Mouse is sceptical of the Sugar Plum Princess's existence, he decides to "reduce the Nutcracker to a pile of splinters before he can find her". He also refers to the Nutcracker as a "thorn in his side".

The Mouse also has a short temper and wants everything to go as he planned. When two of his soldiers admit they failed to capture the Nutcracker, he turns them to stone with his magic sceptre. Since he has a vast collection of petrified subjects, he clearly does this a lot.

The Mouse King is a large character. He's a gray, yellow-eyed mouse with a British accent. He's always seen in his purple uniform and crown, sceptre in hand.

Trivia ◾He was the only main antagonist to be an animal. ◾He is the first antagonist to have a bat, the second being Gwyllion. ◾His voice actor Tim Curry worked with Catherine O'Hara (who voiced Duchess Rowena) in Home Alone 2: Lost in New York.

mouse king fighting with the nutcracker 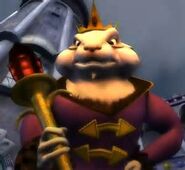 Add a photo to this gallery
Retrieved from "https://characters.fandom.com/wiki/Mouse_king_(barbie)?oldid=83220"
Community content is available under CC-BY-SA unless otherwise noted.