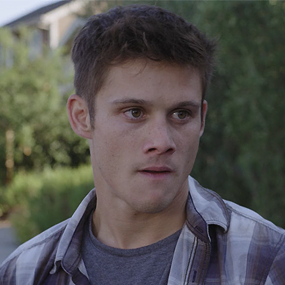 "Do you know what I got Alex? I got my friends, I got the team. I don’t get to be all boo-hoo I’m sad my friend died, I’m gonna put a bullet in my head so the whole world feels sorry for me. Jesus, you wave that gun around like I give a s**t. I don’t man. If I sell out Bryce or lie either way my life falls apart. I got no one else on my side. I can’t run home that team’s my home. Going to playoffs, winning state, being an athlete? That’s not about fun for me it’s about survival. It’s all I got. It’s everything."

He is portrayed by Timothy Granaderos.

Montgomery is causally vicious to the other students (Especially Tyler Down) and uses physical cruelty the most often, seemingly just for the pleasure of it. Despite his behavior, his status as a popular athlete in baseball protects him from any consequences within the school. He is a member of Bryce Walker's bully friends and is impassionately loyal to him. This is proven in season 2 where he consistently tries to protect his friend Bryce Walker from facing legal consequences for his rape allegations, he goes as far as being an accomplice to his rape of Hannah Baker (who later killed herself partially because she felt she couldn't handle the trauma the rape caused her), and an attempted murder to Clay Jensen to keep him silent, to protect Bryce.

Monty initially comes off as very one dimensional. He is a cruel, psychopathic and naturally violent bully, most likely because of his abusive history with his father. His violent tendencies may also be a result of his abuse of steroids. In the second season, Montgomery’s character is shown to be more than just a one-dimensional bully. Monty is a manipulative scheming survivalist willing to side with whoever he believes will keep him safe even if the person is guilty. While Monty is extremely loyal to his friends and teammates, especially Bryce, it is not out of care or compassion but rather as a necessity because he believes they are his best chance at surviving his abusive home. Even though Monty knows Bryce is guilty of raping multiple girls he still sides with him because of Bryce’s family’s influence and therefore his best chance of survival, despite knowing Bryce would never go the lengths Monty went to help Monty. He is also unsympathetic and empathetic towards any of his victims or Bryce’s victims.

This season Montgomery is the least villainous and he is mostly an antagonist because of his brutish nature.

At one of Liberty High School's school dances, he goes up behind Courtney Crimsen and forces himself on her body, asking her sexually for some fun later on, although he does stop touching her when she pushes him off.

Later, Montgomery was driving recklessly with Justin Foley on their way to school where he almost hits Alex Standall, remorseless, he laughs vacuously in response to Alex angerly yelling that people were walking. The two then get in a fight, which Montgomery easily overpowers, and later Montgomery is suspended for 3 days.

After his suspension Montgomery torments Tyler Down despite the latter's unprovoking actions. He once shoves Tyler to the floor when he passes him in the hall, and another time pins Tyler against the wall and threatens to break Tyler's expensive cameras against Tyler's face. Alex steps in and Montgomery backs off. This is his final antagonistic appearance in the season.

Montgomery is a villain in this season and many consider him the main antagonist (even more than Bryce Walker) of the season. As one of Bryce's friends, he goes at great lengths to protect Bryce from any legal consequences due to the rape accusations Bryce faces. Montgomery's deeds consist of:

When he is confronted, he ditches the crippled Alex Standall in an abandoned building and snatched the gun Alex had. Later it is revealed that he witnesses Bryce Walker raping Hannah Baker from inside Bryce's pool house, however he chose to not intervene and remained silent about it without a shred of guilt.

He vows for revenge on Tyler Down when the latter indirectly ends baseball season abruptly before state by vandalizing the baseball field.

Later he and two of his lackeys run into Tyler Down in the boys bathroom. Angry at Tyler for ruining the season, he accuses Tyler of ruining his life then assaults him by smashing the back of Tyler's head into the mirror, breaking it. Then slams him head first on the side of one of the sinks. He vulgarly calls Tyler a faggot and begins shoving Tyler's head in the toilet while Tyler cries out that he's sorry repeatedly. Montgomery then tops it off by shoving the end of a mop in the bathroom up Tyler's anus while his two lackeys hold Tyler down, thus anally raping him. He pushes the stick so far up Tyler's anus that it bleeds and he later is revealed to be unable to defecate without bleeding. Montgomery and his two friends leave Tyler behind in tears and agony, not knowing that this was the last straw for Tyler and they indirectly pushed him so far he decides to go through with his plan to shoot up the school at their Spring Fling Dance.

Retrieved from "https://characters.fandom.com/wiki/Montgomery_de_la_Cruz?oldid=144778"
Community content is available under CC-BY-SA unless otherwise noted.