Half Alien & Half Human

Mizuho (as alien physiology is only hinted at, and growth rates may be different for the un-named alien species she is partly derived from) is a 23 year old half alien, half human, Class C Planet Inspector from the Galactic Federation who, was sent to delta DES 8228 (Earth) to observe and study humans. Mizuho came to Earth to monitor the planet, but was inadvertently seen by Kei Kusanagi as she was just landing on Earth. Although she did not trust him at first, she started to become attracted to Kei and eventually falls in love with him after they shared secrets about their past to one another. In a conversation with Maho Kazami, Kei learns that she is the youngest member of the GF Observers ever to gain a license.

Mizuho is a very beautiful young woman with long hot red hair that is tied in a ponytail, which is styled in tube-like ringlets with bangs hanging on the left and right side, purple eyes and large breasts.

She wears a sleeveless black suit that is cut in the middle showing her cleavage, black gloves and black boots.

There are two outfits that Mizuho wears:

The first and most coming outfit she wears is a white colored baggy sweat shirt were the sleeves cuts below her elbows with a line that goes around on the shoulders, and coat-like areas on both the sleeves, bottom of the shirt and collar, she also wears blue colored Capri pants were it cuts below her knees, and red slip on sandals.

The second outfit she wears is a black top with a pink jacket, a long light purple skirt and black strip on sandals.

She wears a stander teacher outfit that has a long sleeve shirt, a black colored skirt and slip on shoes.

Mizuho is a kind, calm and well-behaved person.

Mizuho is a teacher at Kei Kusanagi's school and she is seen as his teacher. But back at home, Mizuho and Kei are actually married where they keep this a secret from the school's other teachers, students and Kei's friends only it is seemed at some ending episodes that Ichigo Morino and Koishi Herikawa gotten to know about Kei loving their teacher (Mizuho Kazami).

One of the main conflicts in the story involves Mizuho and how she tends to have great jealousy and misjudgment. She even went to great lengths to spy on Kei Kusanagi while he was hanging out with a friend from school, Koishi Herikawa, in a date set up by Ichigo Morino. Also, when Mizuho's mother held Kei hostage in a hotel. 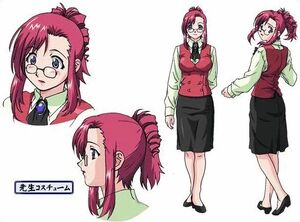 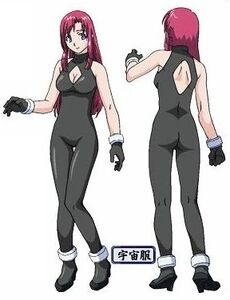