Misty (Japanese: カスミ; Kasumi) - a protagonist in the Pokémon franchise.

Her first appearance was in the very first episode of the anime series, Pokémon - I Choose You! In this episode, she first meets Ash after fishing him out of the water when he was trying to get away from Spearow. Ash then takes Misty's bike from her in order to escape the Spearow, which is then wrecked by Pikachu's Thunder Shock. Misty then tracks down Ash and follows him around on his adventures until he can pay her back. She eventually forgets about the bike and becomes one of Ash's closest friends. She is currently the Cerulean City Gym Leader.

In the series, she wears a yellow top that reveals her midriff, red suspenders, denim shorts that stop at her thighs and red sneakers with yellow lining and white laces. Her belly button is not usually drawn, but it is visible when she wears two-piece swimsuits. When she wears her original outfit in her return in Alola, Kanto in Pokémon the Series: Sun & Moon, her belly button is shown the entire time.

Misty's personality in the anime can be very complex at times. She can be very nice to her friends but will then quickly change moods in a short amount of time, particularly anger. She is quite proficient in anything having to do with water as can be seen in certain episodes where she has ability in fishing, swimming, and overall Water Pokémon training. Even though she wanted to stay with Ash, Misty felt obligated to watch over the Gym. The two went their separate ways, and Misty became the official Gym Leader at Cerulean City's Gym. 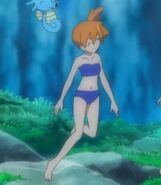 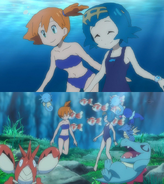