Mighty is an explorer and a long time acquaintance of Sonic the Hedgehog and good friend of Knuckles the Echidna. Despite the two both being representatives of different animal species, both Mighty and Sonic look very similar in their appearance, abilities, and both of them being unexpectedly fast.

Before Sonic the Hedgehog was introduced to gaming industry, one of the character concepts, an armadillo, was considered as one of mascot choices for Sega to be introduced in new video game series to success in console market business against Nintendo. The mascot was going into either a hedgehog or an armadillo, due to both species having the ability to roll into balls, and after that hedgehog was chosen. Due to this, some believe that Mighty is the prototype of Sonic, or was evolved from the armadillo concept.

The character concept was later reused in arcade game SegaSonic the Hedgehog and later in Knuckles' Chaotix. His character designer was Manabu Kusunoki.

Mighty is based on real-life's armadillo. His fur body is black with red thick armor, which rounds from the forehead above to the lower back up. Mighty's ears are side facing the funnel-shaped like real-life's armadillo. Mighty's skin color along with ears, mouth, arms and belly is yellowish-tan. In some areas, Mighty bears resembles to the Sonic the Hedgehog, main character of the series. Both got interconnected, cartoonish, circular eyes with black pupils, both have white gloves with sock-like cuffs and red shoes with white socks.

In fact at SegaSonic the Hedgehog arcade game, Mighty's shoes were almost identical to the Sonic's ones, as sneakers were red with, white socks and white straps without golden buckles. Later his shoes were slightly altered in Knuckles' Chaotix, as a pair of shoes are red, having white socks and white shoe soles. Instead of straps, Mighty's shoes got white overlay line.

Mighty's first appearance is in the arcade game SegaSonic the Hedgehog, where he was captured by Doctor Robotnik along with Sonic the Hedgehog and Ray the Flying Squirrel. They were taken to Eggman Island and imprisoned, but they made their way through the island's defenses. After the trio got to the control room of Eggman's Tower, Robotnik activates self-destruction of island. Despite that, the whole cast manages to get out of Eggman Island, which got destroyed in the process.

In this game, Mighty played exactly like Sonic and Ray; he was fairly fast and could roll into a ball to perform the Spin Jump and Spin Attack. In the game, he was voiced by Yūsuke Numata.

Mighty made a cameo appearance in Gale Racer (the Sega Saturn version of the arcade game Rad Mobile) as being swinging ornament in the windshield.

Mighty makes his next appearance in Knuckles' Chaotix for the Sega 32X. In the Japanese manual, he just happened to stumble across the island which the adventure is set on during his explorations. In the American manual, he is a friend of Knuckles the Echidna, and happens to visit "Carnival Island" when Eggman attacks.

In both manuals he is captured by Eggman, and imprisoned in his Combi-Confiner machine. When Knuckles arrives, he can pick Mighty out of the machine and use him as a partner. Mighty plays very much like Sonic from the previous Sonic games, using his Spin Attack and Spin Dash. He also has the ability to kick off walls in order to gain height.

Mighty's sprites are based on Sonic's sprites from earlier prototype version of the Knuckles' Chaotix called Sonic Crackers.

Mighty makes a small cameo appearance in Sonic Generations in City Escape. Mighty and Ray can be seen on missing posters dotted throughout the level, the poster mentions that they've been missing since 1993, referencing the arcade game, SegaSonic the Hedgehog.

In the video games, Mighty is described as gentle and caring pacifist, only using his strength and fighting abilities when there is no other option. He loves to travel, and his dream is to journey to all places of the world. According to the Japanese booklet of Knuckles' Chaotix, Mighty enjoys forest bathing, likes peace and nature, and detests violence.

Like most characters in the series, Mighty has some super speed. Mighty can use the Spin Attack, where Mighty curls up into a compact ball and rolls into enemies. He also has the Spin Jump, during which Mighty jumps into the air as a ball. Mighty has the Spin Dash (originally named the "Super Spin Dash") as well, which allows him to charge up a Spin Attack from a standing position, and then shoot off towards enemies.

Mighty's unique move in Knuckles' Chaotix was a wall kick that let him kick off a wall, gaining some height and letting him traverse up shafts as long as the walls are close enough to each other. Despite his namesake, Mighty has never demonstrated a single feat of super strength in the games continuity and it is never directly stated in any official literature related to Knuckles' Chaotix or SegaSonic the Hedgehog arcade game that he has such an ability.

Appearances In Other Media

In Sonic the Comic, Mighty was the strongman of the Chaotix Crew. He possessed super strength, making him a valuable asset, but he frequently acts without thinking. He has a rivalry with Espio, and the two sometimes bicker about which is the better fighter.

He is the son of a senile super-strong superhero known as Blockhead Bill, who is constantly getting into trouble by mistaking random people (including Sonic) for his old enemies, much to Mighty's exasperation.

In the Archie comics, Mighty the Armadillo was born into a family of thieves. While he was still too young to realize his parent's actions, they were imprisoned by the law. Seeking a method to free them, Mighty was confronted by Mammoth Mogul. Mogul used his powers to grant Mighty his incredible super strength. However, even with his new power, Mighty was unable to free his parents. With failure heavy in his heart, he forced a guilty exile on himself. He later joined the Chaotix.

Later, Espio reveals that Mighty's long lost sister Matilda, whom Mighty thought was dead, is still alive. She has been forced to join the Dark Egg Legion, along with Bunnie Rabbot-D'Coolette's uncle Beauregard Rabbot, who is the Grandmaster. Mighty sets out on a quest along with Ray the Flying Squirrel, whom he considers a brother, to find his sister. When they first meet, Matilda has no reconnected of Mighty, due to her being roboticized at a very young age before being legionized. At first, Mighty was heartbroken, but Ray is able to show Matilda how much Mighty cares for her and she finally opens up her heart. Matilda ends up saving Mighty's life by putting herself in front of an explosion, and is injured in the process. She is unable to return with Mighty to Angel Island, but Mighty promises his sister that they will meet again after she is healed. 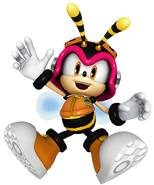 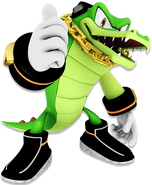 Vector the Crocodile
Add a photo to this gallery

Sonic the Hedgehog
Add a photo to this gallery

For a full gallery of Mighty, see Mighty the Armadillo/Gallery.

Retrieved from "https://characters.fandom.com/wiki/Mighty_the_Armadillo?oldid=122160"
Community content is available under CC-BY-SA unless otherwise noted.