Meimi Haneoka is the Protagonist in Saint Tail.

During the day, Meimi is a typical fourteen-year-old student attending St. Paulia's Private School. However, she has a secret. At night she transforms into the mysterious (yet magical) thief, Saint Tail! Under the guise of Saint Tail, Meimi steals back what others have taken dishonestly.

Saint Tail is pursued by Meimi's classmate, Asuka Jr. An amateur detective appointed by the mayor to catch the thief. By Asuka Jr.'s request, Saint Tail sends him notices of her crimes in advance, so he may have a fighting chance.

The series follows her as she attempts to keep her secret identity from Asuka Jr. whilst also completing the mission at hand.

Meimi Haneoka is a fourteen-year-old girl, with orange hair and blue eyes. In civilian form she is most often shown in her school uniform, consisting of a white shirt, pink jacket, cream skirt, green bow, and a pink hat.

In later episodes, another version of the uniform is seen.  The second version consists of a white shirt, pink pinafore, and green bow. This is most likely the summer uniform at St. Paulia's.

As Saint Tail Meimi`s hair is pulled into a ponytail, her magical outfit is inspired by a magician's suit.  The outfit consists of a white sleeveless shirt, a black waistcoat, long black gloves, black tights and boots, and sometimes a magician’s hat.

When transforming and using her magical attack she is shown holding a gold cane with a large pink jewel. 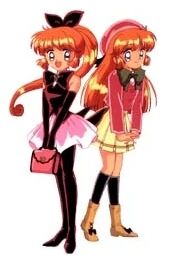 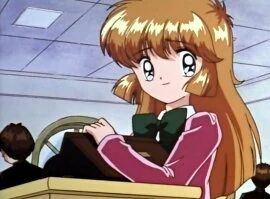 Add a photo to this gallery
Retrieved from "https://characters.fandom.com/wiki/Meimi_Haneoka?oldid=159041"
Community content is available under CC-BY-SA unless otherwise noted.