Fictional Characters Wiki
Register
Don't have an account?
Sign In
Advertisement
in: Pages that are underlinked, Pokémon characters, Females,
and 26 more

May is a young, tomboyish and energetic Pokémon Coordinator currently traveling through various regions to compete in Pokémon Contests. She started her journey traveling through the Hoenn region accompanying Ash and Brock, along with her little brother Max. On the way to the Grand Fesival, she met Harley and Drew. When Ash and Brock left for Sinnoh, she goes to Johto alone without Max. She appears in a few episodes of Diamond and Pearl: Battle Dimension, where she traveled to Sinnoh to compete in the Wallace Cup. She reappears as a flashback in The Dream Continues.

May has brown hair secured by a red and white kerchief, and blue eyes. She wears a red shirt with a navy blue circle on it, yellow fanny pack, white and navy mittens, short and sleek dark blue bike leggings, white mini-skirt, and black socks along with red sneakers with black and yellow stripes. Her emerald-based outfit is an orange tunic with white pockets and stripes with a mint fanny pack, green and white kerchief, black collared tank top/vest underneath, the same socks, orange, white and black shoes along with the leggings color changed. In her cosplay as Nurse Joy, she wears a pink mini-dress, white dress coat, a nursing cap with a pink cross, and white Mary Jane flats.

At the start of her journey, May didn't like Pokémon, as she wanted to start her journey just so she can visit places. However, her encounter with Ash and Brock changed that. Despite her beauty, May is a kind-hearted person, who would help people in need. Like Misty, she can get very angry at times, with her disagreements with Ash or her brother, Max. However, she can get very sad, especially when she loses a Contest, but does her best to prevail. She is also shown to have a side for romance, though at rare occasions.

May is a Pokémon coordinator from Petalburg City and is the daughter of the Petalburg City Gym Leader, Norman, and sister of Max. She met Ash Ketchum in Hoenn and starts traveling with him after obtaining her first Pokémon, Torchic. She hasrivalries from some contest participants, Drew, Harley, and Jessie of Team Rocket, and goes on to win many contests. She picked Torchic as her first Pokémon and Squirtle as her first Kanto Pokémon.

She loves cute and pretty Pokémon and flashy techniques, competing in contests and making her own Pokéblock with recipes that she thinks up. "May's Purple Surprise" and "May's Pink Surprise" were such examples, as everyone else rejected them after tasting them, while the only ones who liked her Pink/Purple Surprise are her Munchlax and Jessie.

When May saw a contest battle for the first time, she decided to become a coordinator. She then had to overcome her fear of Bug type Pokémon by raising herWurmple into a Beautifly.

While Ash and Brock chose to travel to Sinnoh, May decides to follow her rivals to Johto. However, she meets up with Ash, Brock, and Dawn in Sinnoh, wearing a green bandanna like the character Pokémon Emerald, then sometime later participates in the Wallace Cup. Dawn once referred to her as "Princess" which makes the fact that she has an unknown identification believable.

After narrowly losing to Dawn in the Wallace Cup Finals, she leaves the group to continue her journey in Johto.

She would use her Combusken's Fire Spin and her Squirtle's Bubble to create a combination of Fire and Water. Which was dubbed by Lillian's Medichan as a Fire and Water Whirlwind. She was able to knock-out Drew's Flygon and his Absol. During her journey she won numerous ribbons in both Hoenn and Kanto and she is still using those skills and talents in Johto currently. But May did reappear during the Sinnoh saga in four episodes meeting Ash, Pikachu, Brock, Dawn and Zoey for the Wallace Cup. May also has a personal ending theme song called I Won't Lose also called Haruka's theme in Japan in two episodes of the Pokémon anime's Kanto Battle Frontier saga the theme was used as background music in Curbing the Crimson Tide! and again in the next episodeWhat I Did For Love!. It was also used during the Sinnoh Wallace Cup saga. 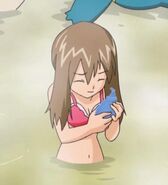 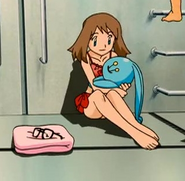