Max and Jax Minner are former circus strongmen turned rival insurance agents who disguised themselves as the Humungonauts.

Max and Jax are large, middle-aged Caucasian males, with blond hair and mustaches. Jax has a scar across his left eye.

They have a strong mutual dislikes and easily lose their temper with each other.

In The Battle of the Humungonauts Max Minner and his brother Jax Minner were former circus strongmen until Max joined a rival circus. They soon became bitter enemies, and eventually set up insurance agency in Crystal Cove.

To destroy each other's businesses, they dressed as Humungonauts.

When it came to a dock that Mystery Incorporated set a trap for, the Humungounauts ended up fighting the Humungonauts until they both easily got caught in Fred Jones's trap. When Sheriff Bronson Stone and Mayor Jones arrived with the cops, Velma unmasked the Humungounauts as Max and Jax Minner. After their backstory, Max and Jax stated that they would've got away with it to "if it weren't for my meddling brother." This caused the brothers to fight again as two police officers tried to break it up. 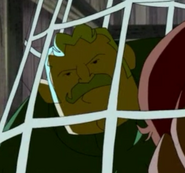 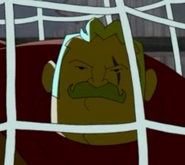 Add a photo to this gallery
Retrieved from "https://characters.fandom.com/wiki/Max_and_Jax_Minner?oldid=78136"
Community content is available under CC-BY-SA unless otherwise noted.