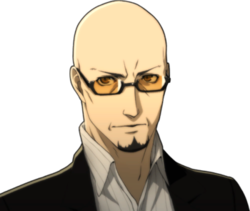 Masayoshi Shido is a character from Persona 5 and one of the main antagonists of the game alongside Yaldabaoth. The seventh and final major target, Shido is the head of The Conspiracy, a powerful politician, and Goro Akechi's father. His belief that it is his god-given right to lead society and destroy any who dare cross him creates a Palace inside the Collective Unconscious, where he transforms into Samael, demon of Pride.

Shido's Palace is an enormous, multi-tiered cruise ship, which is imposed over the National Diet Building in the real world. His treasure in the Palace resembles a ship's steering wheel; in the real world it manifests as his politician's badge.

Shido wears a pair of orange-tinted square glasses and he's bald. He has a small goatee.

Shadow Shido initially wears black army general uniform with long cape, long white gloves and knee-high white boots. His spiked helmet resembles that of the Statue of Liberty or Principality. He initially does not transform himself. Instead, he summoned a golden lion, made of golden humanoid figures, called the "Beast of Human Sacrifices" as a mount.

The Beast itself has two transformations after its base form is damaged. It reconfigures itself first into the "Wings of Human Sacrifices" (the previous form with bird's wings) and then the "Tomb of Human Sacrifices" (a pyramid which resembles the Eye of Providence with a high-caliber cannon replacing its eye) before it is destroyed and he fights directly.

Akira Kurusu met Shido when he was drunk, harassing a woman on the street. When Shido noticed Akira he threatened the latter not to get in trouble with him because of his status as a powerful politician and connection to the police. He lost his balance when the protagonist attempted to pull him from the woman. His forehead hit the corner and bled. Shido angrily accused the protagonist for the nonexistent violence and forced the woman to testify against the protagonist, causing the protagonist on probation as a minor offender.

He and the protagonist later meet again when the protagonist are eating together at a hotel restaurant with Ryuji Sakamoto, Ann Takamaki and Morgana, though he does not recognize Akira. While waiting for the elevator to go back to the restaurant, Shido and his subordinates rudely shove them and other people who are waiting in front of the elevator away. When the protagonist and Ryuji protest that they are there first, Shido, as usual, threatens to use his connection to sue them. This convinces Akira, Ryuji and Ann to continue their work as Phantom Thieves.

His emotions of disdain towards the current condition of society eventually transform him into Samael. He acts as the final heist target of the Phantom Thieves of Hearts at the Shidou Palace. He embodies the deadly sin 'pride'. He turns out to be at the center of a conspiracy to rig the election for Prime Minister in his favor, allowing him to put his highly draconian and ultra-nationalistic political beliefs into effect, uncaring of the misery this would cause to Japan in general.

− − He is also revealed to be the father of Goro Akechi, who is his illegitimate son. Shido uses Goro's fame as detective and desire to be acknowledged by him to get rid of those who are opposing him to become the next prime minister by destroying their Palace which results in severe mental disorders and ultimately kills them, framing the Phantom Thieves for these assassinations in the process. When the Thieves confront Shido's Shadow in his Palace, without knowledge of his son's apparent death, he admits that he was going to kill Goro anyway once he becomes prime minister because he knows too much. During the fight, he finally recognizes the protagonist as the student who interfered with him before. After the Shadow is defeated, Shido admits he was wrong for having the protagonist arrested, and vows to make amends upon returning to his real self.

His Treasure is his politician badge which takes the form of a wheel of his cruise-shaped Palace, symbolizing his ambition as a leader. Despite his Shadow's apology to the Thieves, the Shido in reality senses the change of his heart. His physician feeds him medicine to enter suspended animation, hoping to kill the gang in his Palace and stop his Treasure from being stolen. The plan fails as all Phantom Thieves successfully retreat unscathed. Shido's aides send him to the hospital to avoid media coverage of his mental state. On the day of the announcement of Shido's victory in the election, he openly confesses his crimes during the live conference. A redeemed Sae Niijima is tasked with charging Shido.

Despite Shido's confession, however, the general public does not show support for the Phantom Thieves, but are rather more worried about the future of Japan without Shido leading the country. After Shido made his confession, his remaining allies commence an all-or-nothing plan to wipe out the Phantom Thieves and maintain their corrupt choke-hold over Japan. For this plan to work, Yaldabaoth directly influences the people of Tokyo to forget Shido's crimes and blame the entire debacle on the Thieves by manipulating the slothful nature within its citizens.

When the Phantom Thieves enter the Depths of Mementos to change the hearts of the now-distorted public, they encounter the Shadows of their previous targets including Shido. No longer arrogant or ambitious, Shido is now a broken man resigning himself to Yaldabaoth's control. His personality has changed to the point that he now prefers the vision Yaldabaoth has for Japan, saying it will be a far better country than what he had tried to build.

Fortunately, after Yaldabaoth is defeated and Mementos entirely erased, public opinion promptly turns against Shido and his allies, eventually bringing an end to the Conspiracy and its schemes. But still, to prove Shido's guilt, the protagonist must turn himself in as a key witness considering the laws the Thieves had to break over their months of activity. Despite that, with help from the Thieves and their other allies, the woman who was first coerced into testifying against the protagonist is found and admits the truth of what happened with her and Shido. With the prior testimony against the protagonist revoked, Sae succeeds in prosecuting Shido for his crimes and proves the protagonist's innocence, ending Shido's reign of terror once and for all. With the debt repaid and their fortunes fittingly reversed, Akira returns to Leblanc to his friends and the future once stolen from him as a free man while Shido presumably rots in prison for the rest of his life.

Masayoshi (正義) means "justice" which is identical to "seigi", its meaning is mentioned in the plot several times to satirize Shido's injustice deeds. Shi (獅) means "lion" and Dō (童) can compose the phrases related to "child".