The final boss than the brain is for feeding the attack wearing a lightning bolt in women cyborg that has been mechanized. Since it no matter how passive The addition of attack, is not down to physical strength is lost.

Her appearance scene of the arcade version, and smote him from limousine window behind the mystery of man (to be described later), and appeared to beat kick the door, jumped come.

This time, she will eat the damage when hit because there is attack judgment.

When the arcade version are playing in multiple, for some reason it appeared only a few players.

Its strength is not an odd, when came out three bodies in three people play simultaneously, about 1 coin clear is that it impossible.

The pattern was originally acquainted with three of the hero as far as to see the demonstration.

Stage 6 of the Snes version becomes a direct confrontation with her, it becomes substantially following the M. Blaster 2 races. It appeared before the confrontation scene, where come down from the sky without even from. By the way, named Martha splatter head in the nickname, it is not a real name. 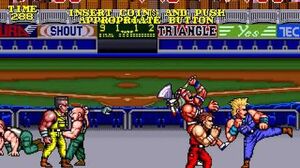