Martha Grace Lorraine is the main character of the show "Martha Speaks". She is a talking dog. When she can't speak, she ate some alphabet soup (According to the doctor; the letters have lost their ways, so they travel to Martha's brain instead of her stomach) and now she became a talking dog.

''Martha's Worst Best Day" reveals that opening the can from the bottom will cause Martha to speak the opposite of what she means. Martha often sticks her nose in other people's business, trying to help, but sometimes accidentally causes trouble.

Martha also seems to enjoy learning new words, perhaps because the ability to talk is new to her.

Martha is considered "bilingual" as she can speak English and Dog; she can also understand Cat but lacks the vocal capacity needed to speak it.

Martha also has mixed feelings about cats, Nelson Boxwood and a cat she met as a puppy have both led her to be prejudiced against them, but she is slowly shedding her prejudice through Helen and Kitten. 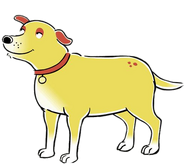