Marrie is the protagonist of the dōjinshi Kuro Gal Mama no Junan | Black Gyaru Mom's Suffering 黒ギャルママの受難. She is a mother and a porn-star.

Marrie is known on internet as a porn-star. She is also the mom of Norikazu. One day two kids will come at her house, they will threaten her to disclose her secret job of porn-star to her family and more precisely to her son who his as the same school of these kids. They had a picture of Marrie secret job, they recognized her by her mole and her singular tattoo. They blackmail her to obtain sexual relations. She is too kind and dont even hit them when they cum inside her. She became her toy, day after day having sex with them, tying her, using sex-toys. However they will reveal to her why they are doing this to her. One kid reveals his torso which is marked by Norikazu's cigarette burns. In fact the son of Marrie is a leader of a gang at school, he bullies them every day, using them like punching-balls. She apologies for her son, but other victims of her son will come at her house.

She is a beautiful woman. She has the typical gyaru apparence. She has nails overdecorated, lipstick, highlighter. Her skin is dark, she has a tatoo and a piercing on the belly button, she as a mole close to her mouse. She shows her cleavage, she has large breast with inverted black nipples. She has long blond hair(ponytail also). She wears biker short, a cougar bracelet, a cougar string and earrings. 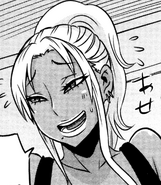 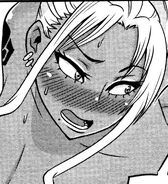 Add a photo to this gallery
Retrieved from "https://characters.fandom.com/wiki/Marrie_Black_Mom_Gyaru?oldid=111853"
Community content is available under CC-BY-SA unless otherwise noted.