To defeat Hawk Moth once and for all

Being compared to Chloé
Liars

Becomes the new guardian of the miracle box

She is depicted as a French-Chinese teenage student who aspires to become a fashion designer and whose parents own a bakery. After she passes the test of Master Fu, the keeper of the magic objects named Miraculouses, by helping him, Marinette is picked as a future superhero alongside Cat Noir.

Unknown to Marinette, Cat Noir's civilian identity is Adrien Agreste, whom she has a crush on.

As a result, she is given a pair of earrings known as the Ladybug Miraculous, which when worn grant Marinette the ability to transform into Ladybug, her superhero alias.

As the holder of a Miraculous, Marinette is assisted by a small red creature resembling a ladybug called Tikki, who is a magical being known as a Kwami. As Ladybug, Marinette's signature ability is creation.

Marinette is a student a College François Dupoir. She is also the main superheroine of Paris. 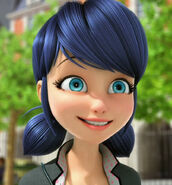 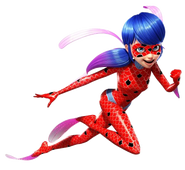 Marinette, Being Hypnotized by Kaa