Lydia Deetz is the deuteragonist of the television series, Beetlejuice. She is Beetlejuice's best friend, and is played by Winona Ryder. 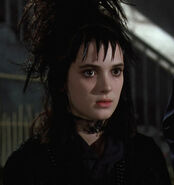