Fictional Characters Wiki
Register
Don't have an account?
Sign In
Advertisement
in: The Loud House Characters, Teenagers, Bisexual,
and 27 more

Originally, as a girly girl:
Rock music (until she was 9 years old)

Currently, as a tomboy:
Classical music, Lincoln being bullied, Luan's puns and pranks, Lucy talking to ghosts, her siblings being sad, people turning off her music, the word "YOLO", Princess Pony, sophisticated parties, people flushing the toilet while she's in the shower

Luna L. Loud is one of Lincoln Loud's ten sisters in The Loud House. At 15 years old, she is the third oldest child of the Loud family. She is a happy-go-lucky teenage girl known for her passion for rock music, which she developed when she attended her first concert during seventh grade. Aspiring to become a rock star, Luna owns various instruments, the most prominent being her electric guitar. She frequently quotes lyrics from famous songs, and also has a habit of speaking in a British accent to imitate her favorite rock star, Mick Swagger. Like her older sister Leni, she is also caring and supportive of her siblings.

Luna is also the first Loud sister confirmed to be bisexual. While she, along with her sisters, had a crush on Lincoln's tutor Hugh in "Study Muffin", she is also shown to have a crush on a fellow female musician named Sam in the episode "L is for Love", and at one point, said that one of Lincoln's substitute teachers was "smoking hot."

Luna is slightly taller than Luan, but shorter than Leni. She has short brown hair, styled into a pixie cut, freckles on her cheeks, and wears light purple eye shadow. She wears a purple t-shirt with a skull, torn crew neck and triangular sleeves, a plaid skirt similar to Luan's (only lavender), a light gray belt, and high purple boots. A distinguishing feature of hers is her paperclip earrings. She also wears three black bracelets on each of her wrists and a choker around her neck.

In "For Bros About to Rock", it is revealed that she had a completely different wardrobe as a snobbish girly girl, who is interested in classical music, before becoming a happy rocker. Originally, she had longer hair that went down to her shoulders, extra eyelashes, a girlish light purple shirt, white earrings, the same square-patterned skirt, white socks, with blue stripes worn high and black Mary Jane shoes. 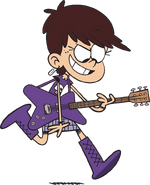 As a happy-go-lucky tomboy, Luna had her interest playing rock music. 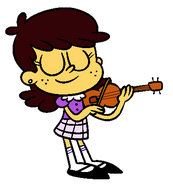 As a girly girl, Luna had her interest playing classical music.

Luna returns to her previous personality