Lucy Mann first appeared during the episode Big Fat Alien Wedding. She is Camille's cousin, and comes to her wedding to perform as the flower girl.

Like Camille and Camille's parents, Lucy is a Sludgepuppy. She is at this moment, Joel Tennyson's cousin-in-law, and was one of the few Sludgepuppies not to be involved in the sabotage of the marriage.

Lucy is a very upbeat and mischievous girl, who loves playing pranks on people, as she especially enjoys teasing her cousin Gwen. She's very silly, but is also apparently quite competent, seeing as how she managed to get through Plumbers' Training Academy in a relatively short amount of time.

In the original series, Lucy has long blonde hair with blue eyes. She is shown wearing a black sleeveless shirt with a star on it, along with a red skirt. She also has two distinct whisker marks on her face.

In Omniverse, 11 year old Lucy's skin is more pink, the whisker like marks on her face are gone, with freckles taking their place. Her eyes have changed color, becoming purple.

16 year old Lucy wears a sleeved dress, with a red collar, a star on the chest area, socks that go over her knees and wears red lipstick.

Lucy has two different Sludgepuppy forms, her more natural one, lacking legs with larger head tendrils and less human facial features, and her humanoid form, which is smaller, has legs, magenta colored eyes, and a more human like face with mud flowing around her head, resembling hair. 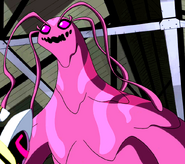 Add a photo to this gallery
Retrieved from "https://characters.fandom.com/wiki/Lucy_Mann?oldid=127191"
Community content is available under CC-BY-SA unless otherwise noted.