Lara is a friendly monster who is buddies with Matt as they like to play along with each other in the national park in the Sesame resource video "Learning is Everywhere". This monster was named after the person "Lara MacLean" and was performed by that actor instead of Stephne D'Abruzzo.

Lara's appearance is the same as Googel in Sesame Street (especially on Sesame Street's former segment "Monster Clubhouse"), but now with green-yellow pigtail ribbons tied on her hair. She can also be spotted on the Trash Gordon sketches with the elastic hair bands (except for the pigtail ribbons) applied to the monster including Planet Upside-Down and Conga for example. This character with the pigtails applied has also been used in the song It's Almost Christmas on the special "Elmo's Christmas Countdown".

She meets up with Abby Cadabby, Elmo, Louise and Miss Fran along with Matt. Then, she gets dirty with mud on her buddy after playing Ring around the rosies with her friends. She also sings about how learning can be everywhere along with others for the end of the video.

Googel is playing ring around the rosies with Elmo, Matt and Abby

Googel and Matt get dirty with mud. 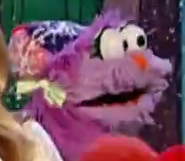