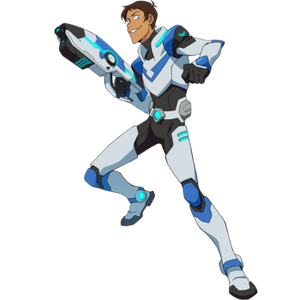 Lance is a Paladin of the Blue Lion and one of the main heroes in Voltron: Legendary Defender.

Lance began his studies in the Garrison, he Hunk and Pidge were in the Garrison in the same year. And when Shiro returned to Earth they started with him and Keith to look for the Blue Lion. And when they arrived at Aurus they met Allura and Coran and then they began to look for the Lions of Voltron, and when the Lions was found they began to go into battle against the Zarkon and Galra empire . Lance is a very flirty character and is known for his flirtatious approach to anyone ranging from humans to aliens. Later in season 3, he becomes the new Paladin of the Red Lion. In season 5, Lance is a great help, chatting and helping Allura figure out things, to goofing around with Pidge and Hunk. Though, things start to go south when Lance and the Paladins are transported into a terrestrial area of their minds and Lance hears Shiro call out his name. Though, when they went back to normal, Shiro couldn't recall. Lance is expected to have a significant character arc in the next upcoming season.

So far we know he has a mom, a brother Marco, a brother Luis, and a sister Veronica.

Add a photo to this gallery
Retrieved from "https://characters.fandom.com/wiki/Lance_(Voltron:_Legendary_Defender)?oldid=82806"
Community content is available under CC-BY-SA unless otherwise noted.