Lady Hephaestia, also known as the Cat Lady, is a minor character in the Disney Park attraction, The Haunted Mansion, which appears in Disneyland in California, Walt Disney World in Florida, and Tokyo Disneyland, as well as its alternate version Phantom Manor at Disneyland Paris. She appears in the painting as a woman lying down on a couch, but slowly turns into a tiger-like monster (or a half cat in the Phantom Manor version.). She wears a black dress, however she wears a white dress in the Phantom Manor version and the concept art. 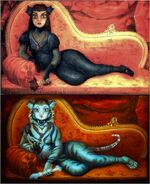 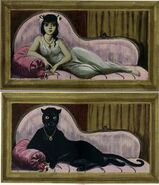 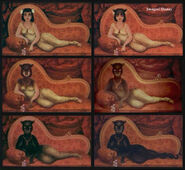 Lady Hephaestia in the movie.

Phantom Manor version of her.
Add a photo to this gallery
Retrieved from "https://characters.fandom.com/wiki/Lady_Hephaestia?oldid=124924"
Community content is available under CC-BY-SA unless otherwise noted.