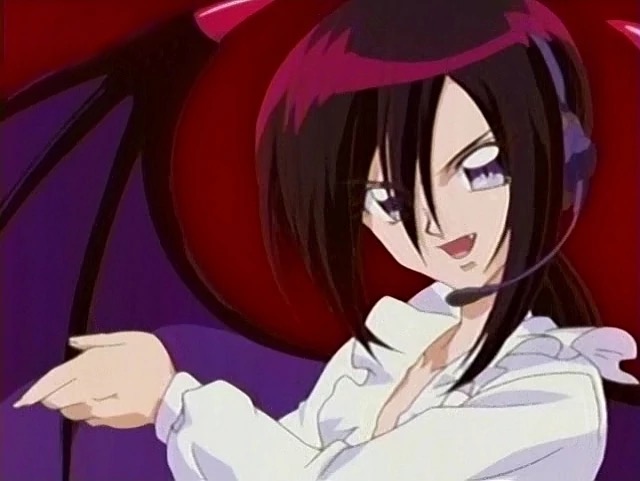 Lady Bat is one of the 4 main antagonists in the anime Mermaid Melody Pichi Pichi Pitch Pure.

Lady Bat is a cross dresser. He has a white shirt with long sleeve that has a V-neck and wears tight dark blue-purple shorts along with a violet belt. Lady Bat has large, purple demon wings. He sometimes wears a dark-blue purple, pointed bat mask, but he puts it off when he is fighting the mermaid princesses. He has sharp elf-like ears. His hair is a dark shade of red-maroon, but they change to black in his human form. His eyes are light purple, but they change to greenish-blue in his human form. He also wears long, dark purple boots. This is the only woman-cloth on him. He has fangs in his mouth, so he can bite someone to forget everything. He is considerably taller than the other servants of Michel. His hair are trussed into a ponytail. He has very white skin. He has been shown with the costume of magician, waiter and medium.

Retrieved from "https://characters.fandom.com/wiki/Lady_Bat?oldid=66939"
Community content is available under CC-BY-SA unless otherwise noted.