sophomore student of Hanazono High School and Riki's girlfriend. Her introduction to the Kunio-kun franchise was in Shin Nekketsu Kouha: Kunio-tachi no Banka, where she was one of the four main playable characters. A beautiful girl with a ponytail and a blue blazer, she is fully loyal to Riki and is his type of girl. Although younger than Riki, she keeps him on a tight leash with her firecracker personality. She is close friends with Misako of Nekketsu High School.

Kyouko's debut appearance in the Kunio-kun franchise. She is waiting for Riki on the roof of Hanazono High School with Ryuta, who is holding her captive. Once Riki arrives, she stands aside so that he can beat the crap out of Ryuta. After his defeat, he reveals that Shinji was the one who ordered him to take control of Hanazono High School. Learning of this, Kyouko wishes to accompany Riki, Kunio and Misako to the amusement park where he is located to take revenge for forcing the Hanazono students to work for him.

Later in the story, she and Misako were both shot by Sabu, rendering them unplayable for the latter part of the game. They are taken to the hospital by Takayama, who later reveals to Kunio and Riki that both girls were out of harm's way after prevailing against the Sanwakai boss.

Kyouko, like Misako, moves and runs faster than both Kunio and Riki. She cannot be grabbed by enemies, but she cannot grab or sit on enemies. Her special techniques are the Mach Kick, the Screw Slap, and the Spinning Chop. 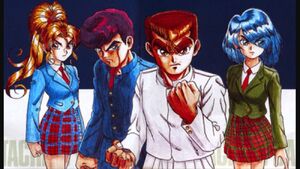 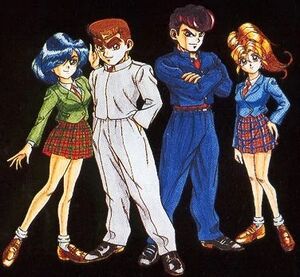 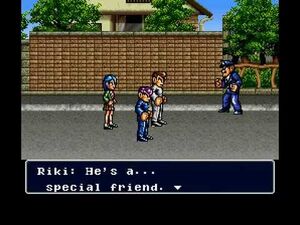