King Dedede is the self-proclaimed king of Dream Land and the main antagonist of the Kirby series. He is the main villain, is usually confronted in a boss fight, and serves as Kirby's arch-nemesis. Though he often engages in evil acts, mostly involving stealing other people's food, he has also done some noble acts, such as trying to seal away Nightmare and helping Kirby and Ribbon on their quest to defeat Dark Matter and Zero Two. King Dedede lives in a castle atop Mount Dedede.

King Dedede first appears in Kirby's Dream Land for the Game Boy, where he serves as the main antagonist and final boss. Prior to the game, King Dedede has stolen all of the food in Dream Land and left the population hungry. Kirby sets out to defeat him and give the people back their food. After traveling through the different regions of the land, Kirby finally confronts the king in his castle atop Mount Dedede. The two of them engage in battle in a boxing ring. Kirby manages to defeat him and the food supplies of Dream Land are saved.

In Kirby's Adventure and Nightmare in Dream Land, King Dedede reappears as the apparent final boss of the game. The game begins with him stealing the Star Rod from the Fountain of Dreams, divides it into seven pieces, and gives them to six of his trusted friends while keeping the last one. This causes Kirby to assume ill will from his enemy, and he sets out and tries to restore the broken artifact. However, unknown to Kirby, King Dedede stole the Star Rod in order to save Dream Land from the clutches of Nightmare. The misunderstanding results in Kirby defeating King Dedede at Rainbow Resort and retrieving all seven pieces of the Star Rod. As Kirby walks towards the Fountain of Dreams to return the Star Rod, King Dedede tries to hold him back and begs him to drop his ambitions. However, Kirby refuses to listen and releases Nightmare as a result. Kirby manages to defeat Nightmare with the Star Rod's help, and at the end, King Dedede's motivations of stealing it are finally revealed. He and Kirby can be seen flying next to each other during the credits. King Dedede also has minor appearances during some of the game's sub-games and appears on the top of every boss level door.

Dedede does not appear until final stage in the game, Dark Castle. He acts as the final boss, if Kirby has not collected all of the Rainbow Drops. If all are collected, then the Dark Matter that possessed him leaves Dedede, and Kirby goes up to defeat him.

King Dedede reappears as one of the two main antagonists of the game, serving as the main villain in two sub-games of Kirby Super Star, namely Spring Breeze and Gourmet Race. Spring Breeze, being a remake of Kirby's Dream Land, features him in his old role as the food-stealing villain. In Gourmet Race, Kirby confronts King Dedede in three different stages, Pumpkin Grand, Corn Hall, and Onion Garden. The two of them then engage in a race for the snacks.

When Dark Matter takes control of Pop Star during Kirby's Dream Land 3 it possesses several of the planet's denizens, one of which is King Dedede. He serves as the boss fought in level 5, Iceberg, and is simultaneously the last boss of the game if the player didn't complete all of the errands in the numerous stages. The fight against King Dedede is separated in two different phases: A battle on the ground, and a battle in the air. While being on the ground, Dedede utilizes his usual strategy of lunging at Kirby, trying to crush him with his mallet, and using his powerful suction attack. After taking several hits, the King switches to the second phase and begins floating in the air. His move pattern strikingly departs from his usual behavior in that phase, and he is capable of performing some bizarre attacks like opening his stomach area like a maw with pointy teeth and chasing Kirby, or shooting black orbs of energy from a giant eyeball in his belly.The battle ends once Kirby manages to defeat King Dedede in this state. Usually, the game ends at that point, but if Kirby managed to complete all the errands from the previous levels, he will get access to the actual final fight of the game, located in Hyper Zone. King Dedede can then be seen in the Hyper Zone introduction scene, and once Kirby defeats the final boss, Dedede will appear in some of the drawings shown during the credits.

In Kirby 64: The Crystal Shards, King Dedede is first fought as a mini-boss, but then ends up becoming an ally of Kirby and Ribbon in their cause to collect the Crystal Shards and save Ripple Star. He is first seen in the game when he finds a Crystal Shard on top of his castle. He snatches it away right before Kirby can pick it up, much to the king's enjoyment. Before the group can convince him to return the shard, however, King Dedede gets possessed by Dark Matter, which forces him to fight Kirby. The battle itself is reminiscent of the two phases of the King Dedede battle in Kirby's Dream Land 3, albeit not as hard to complete. Kirby manages to defeat him, drive out Dark matter, and get back the Crystal Shard, but King Dedede snaps after the battle and refuses to look at the group any further. After they leave, he can be seen visibly struggling, until he makes the decision to follow them along. After that he becomes playable in some level segments, allowing Kirby to ride him piggyback and to use his wooden mallet. He is also playable in the multiplayer mode that comes with the game.

King Dedede makes a relatively minor appearance in Kirby Air Ride as an unlockable character. After unlocked, he can be selected as an Air Ride Machine in the game's Air Ride mode. Unlike Kirby, he cannot inhale enemies nor copy their abilities. However, he rides a powerful bike, and is capable of wielding his hammer as an effective weapon at all times.

Aside from his role as a playable character, a larger and more powerful version of the king appears as an antagonist in Vs. King Dedede, a Stadium of the game's City Trial mode.

In Kirby: Canvas Curse, King Dedede appears as a boss painted by Drawcia to engage Kirby in a Gourmet Race-esque fight. Kirby needed to fight Dedede twice on two different worlds in order to move on. Further, if purchased in the Medal Shop, Dedede can become a playable character, being inflicted with the same curse as Kirby has. As a ball, King Dedede moves slower than the other characters, and can use his hammer to attack enemies.

In Kirby: Squeak Squad, when Kirby's strawberry shortcake was stolen, Kirby immediately blames Dedede for the theft of his cake. However, upon defeating Dedede, it turns out that he didn't had anything to do with Kirby's cake. Suddenly, the titular Squeak Squad comes in and steal the treasure chest believed to hold Kirby's cake. Suddenly, King Dedede grabs Kirby and throws him at the Squeaks, leading the bunch to a tunnel. Dedede doesn't appear for rest of the story from that point on.

Dedede's the self-proclaimed king of Dream Land. While he says he's king, Dedede performs no administrative functions and the citizens of Dream Land continue to live as they always have. He's able to suck in air and fly like Kirby does, but only as a result of the vigorous training he undertook after being bested by Kirby.

King Dedede makes an appearance as a playable character in Super Smash Bros. Brawl alongside Meta Knight, who is also a new fighter, and Kirby, who has been a fighter since the first game. His attacks are especially strong, particularly his side Smash Attack, though the fact that he is slow can greatly lower the player's chance of winning. Like Kirby, he has the ability to jump multiple times.

Super Smash Bros. for Nintendo 3DS and Wii U

King Dedede returns as a playable character in two games.

The self-styled king of the amazingly peaceful Dream Land. He continually does things unbecoming a king, like stealing the kingdom's food supplies or all the stars from the sky. He's not all bad, though, and sometimes performs good deeds. While he and Kirby often battle, they've been known to compete good-naturedly at speed-eating contests and minigames.

King Dedede resembles an obese blue penguin creature, wearing a kingly red coat and a red hat with a yellow brim and a pompom. The red coat itself sports a white hem and a portrait of King Dedede himself on the back. King Dedede's belly, which can be extended like a balloon, is yellow and clothed by a colorful belt with a pattern resembling teeth. King Dedede is often seen with a big wooden mallet, which is also his preferred weapon. 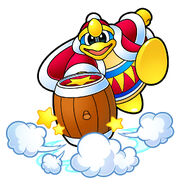