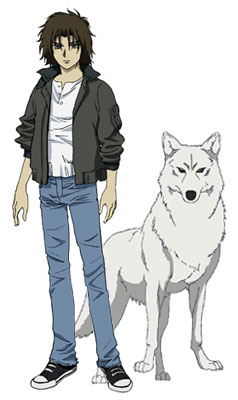 "They say there's no such place as Paradise. Even if you search to the ends of the earth, there's nothing there. No matter how far you walk, it's always the same road. It just goes on and on... But in spite of that, why am I so driven to find it? A voice calls to me. It says, 'Search for Paradise.""

Kiba is the main protagonist of Wolf's Rain and is the very first wolf to be introduced.

In his natural/true form, Kiba is an arctic wolf with yellow eyes.

In his human form, he resembles a human of around seventeen years old with medium brown hair and ice sky-blue eyes. His clothing consists of a white shirt, a grey/black jacket with rolled sleeves, light blue jeans, and black and white sneakers. He usually is seen with his hands in the pockets of this jacket. Unlike the rest of the wolves in his pack, he is the only one not to retain a feature from his wolf form in his human form.

At first glance, Kiba seems to be an aloof, distant individual who always keeps his cool. He takes great pride in being a wolf and dislikes humans for the mass hunting and killing of wolves, which is why he feels irked when wolves use their human disguises, feeling as if the wolves do not take pride in themselves. Despite having a calm disposition, he can have a temper and tends to be impulsive, acting mainly on his instincts or his heart rather than his head. His mistrust in early episodes and natural pride as a wolf makes him reluctant to disguise himself as a human, but that changes when he meets Hige, who tells him that his pride won't count for much when he's dead.

He is also shown to be very courageous, always willing to save and protect his friends from danger. He becomes especially attached to Cheza, whom he remains utterly devoted to from the time they meet until the end of the series, often risking his life to take her back from the Nobles and other abductors to protect her.