Kermit the Forg is a tall gray humanoid monster with a long green nose. He was first seen in a Sesame Street sketch in which Kermit the Frog is frustrated in his attempts to buy a personalized t-shirt from the T-Shirt Salesman. The sketch also features Kermit the Gorf and Kermit the Grof.

This monster has appeared periodically on Sesame Street since 1978. In his later appearances beyond 1980, he gains lavender eyelids and brown eyelashes. He has been performed by Jerry Nelson (The Wonderful World of T-Shirts), Richard Hunt (We Are All Monsters), Michael Earl (Near Far Monsters), and Martin P. Robinson (Monsters of Venice) among others.

The "Kermit the Forg" wordplay was reprised in Episode 314 of The Muppet Show, with guest star Harry Belafonte. The episode included a running gag involving Fozzie Bear writing the script for the show as it went along, with several spelling errors as the result of Fozzie's handwriting. Kermit's opening monologue began as follows: "Lagies and Jecklefins... my name is Kermit The Forg -- The Forg!?!"' 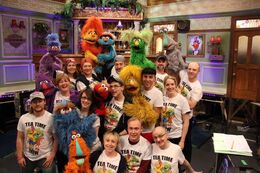 Kermit with the other Furchester Hotel muppets and performers.

As Sally with Bill and Phil.

Kermit gets irritated by Phoebe's sneezes that caused a mess on him.

Kermit gets blown away.

Kermit dances with the monster. 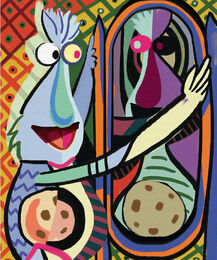 A painting of Kermit the Forg from the Sesame special The Cookie Theif. 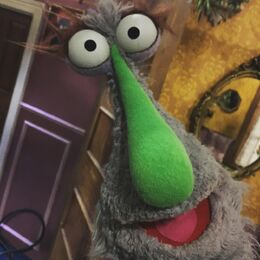