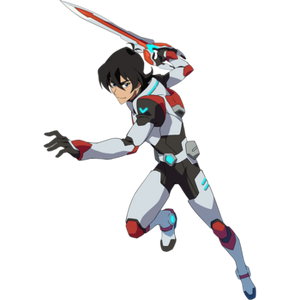 Keith is the current Paladin of the Red Lion of Voltron. A boy of few words and dry wit, Keith is a loner and rebel by nature with "discipline issues" that resulted in his expulsion from the Galaxy Garrison. Keith is one of the main heroes in the DreamWorks animated series Voltron: Legendary Defender.

Keith is hotheaded and temperamental, much like his lion, which makes it hard for many to work with him. As an orphan,[1] Keith has seldom had the chance to form attachments to others and was fairly quick to forget his classmate, Lance, upon expulsion from Galaxy Garrison. However there was one person that Keith actually knows was Shiro. He has spent most of his time since his expulsion living alone in a shack out in the desert, searching for meaning in his existence, and exploring a nearby range of mountains. It was in these mountains that he learned of the existence of the Blue Lion.

Keith is a man of action who hates running from conflict, although sometimes his bravery causes him to get in situations that are way over his head. He also has a somewhat antagonistic relationship/rivalry with Lance, which causes the most friction within the team, however Keith seems to be less spurred on by true aggression towards Lance and more by his competitive nature. Keith is confident, and sometimes forgets that patience is necessary in his line of duty. He is also extremely perceptive, as he was aware of Pidge's identity as a girl despite her efforts to disguise her gender.

Keith has a highly confrontive personality and is definitely not the type to back down from a fight. This trait is best witnessed during his battle with Zarkon, who was using the Black Bayard to push Keith and Red beyond their limits. His fiery personality sometimes causes Keith to forget crucial details of his missions, an example of this was when he and Lance were put on a joint mission to destroy the Galra fighters before they could launch and he forgot that the Balmera was a living creature, although he was quickly reminded of this by Lance before any real harm was caused. Keith can be somewhat reckless at times with his Lion's capabilities, including the plasma blaster, which Keith and Red used to melt through a Galra installation on the Balmera, before Hunk and Lance rectify this almost fatal misstep in judgment. Keith is also quick-witted, making many casual remarks and observations much to Lance's chagrin.

Despite his tendency to jump into battle, Keith can be quite calm and cautious at times, an example of this being his wariness of the local Arusians, taking a while to warm up to the friendly aliens before trusting them completely. Keith is also just as goofy and free spirited as the rest of his team, it just takes a little longer for the somewhat stoic Paladin to show this. One example of his fun-loving side being when he spat out a mouthful of nunvil, an Altean drink (that Lance described as tasting like hotdog water and feet) into Hunk's face only for the Yellow Paladin to turn around with food in his eyes, making Keith let loose and laugh like everyone else. Keith even comically prodded Lance after he vomited from the foul-tasting beverage until the Blue Paladin collapsed on the ground. He has also shown his fun-loving side during the infamous food fight during training, throwing plates of food goo into Allura and Coran's faces and laughing wildly. Despite his rivalry with Lance, Keith and he actually make a good team, and their complimentary skills and abilities make them an unstoppable duo both in their Lions and in close combat, with Keith's masterful swordsmanship matching surprisingly well with Lance's precise and deadly marksmanship. He also has a poor opinion of Lance's piloting skills, losing his cool completely and crying out in shock and fear during Lance's first run in the Blue Lion, "YOU ARE! THE WORST! PILOT! EVER!"

Keith's unstable and unpredictable nature causes him to be extremely susceptible to overwhelming outbursts of anger, shutting down his normally calm personality and putting him into a frenzied state of uncontrollable rage. This is most prominently displayed during his duel with Zarkon, during which his ability to listen to reason was completely incapacitated. He even shut down his com systems to better focus on his enemy, which resulted in Keith drawing out more of Red's raw power. However, Keith's normally cunning and tactical mind were no match for Zarkon's millennia of experience, and so he was outmatched. For Keith, nothing can stand in the way of his fury.

Keith's interactions with his teammates vary greatly, as can be expected when dealing with such a diverse group of young men and women. Keith looks to Shiro like a brother, as revealed during his hallucinations during his time in the Trials of Marmora. Keith has consistently shown Shiro a degree of respect and deference that he seldom shows to anyone else and cares for his well-being. His interactions with Lance are primarily antagonistic, as the two often clash due to Lance's jealousy of Keith that hearkens back to their days at the Galaxy Garrison. However, when the two of them get their act together, they make an almost unstoppable team due to their complimentary fighting styles, mixing Keith's melee combat with Lance's skill as a marksman. Keith is friendly enough with Hunk, though is occasionally annoyed with the Yellow Paladin's goofy humor during times of crisis. What interactions Keith has with Pidge indicates a degree of mutual respect, even though Keith's intense nature causes her to think of him as something of an "emo."

Keith is known to have been curious regarding his knife's origins after noting the similarities between it and the one that the Blade of Marmora agent, Ulaz, wielded. Following this, Keith began to wonder more about where his Galra blade came from, causing him to sink somewhat into seclusion from the rest of the team. His Galra heritage is something that he is very defensive and self-conscious of, as he tried to ease Allura into thinking that not all Galra are inherently evil, and felt dejected due to her prejudice of the Galra even extending towards him. Luckily for Keith, he gained closure when Allura came to terms with her own negative feelings towards the Galra, making amends with him, stating that his heritage should not interfere with her duties or their friendship.

During his brief interactions with Thace, Keith gained a newfound respect for his Galra heritage, stating that it was an honor to have met and fought alongside a fellow member of The Blade of Marmora. Along with Thace, Keith's interactions with other Blades of Marmora such as Ulaz profoundly changed how he viewed the Galra, allowing him to see the nobility of their race, and finding a quiet pride in being one of them.

Keith has deeply shocked his teammates with occasional displays of ruthlessness, such as when he held the Olkari king, Lubos, hostage at sword point, threatening to viciously decapitate him if the Galra soldiers didn't lower their weapons. This was likely due in part to his identity crisis regarding his own Galra heritage, the stress of which caused him to be more violent as he doubted his own humanity.

Keith is notably fond of the outdoors, finding the quiet of the forest and wild lands to be enjoyable.

Keith embodies the Red Lion's elemental affiliation of Fire in his hotheaded personality, fierce instincts in battle, and often incendiary humor and remarks. But like fire, Keith's impulsive and explosive tendencies can be harnessed as a valuable tool and weapon to ensure the survival and victory of his friends and innocents.

A skilled martial artist, Keith is extremely capable on the battlefield as his Bayard takes the form of a double-edged sword that can slice through solid steel with ease. He is dedicated to maintaining his abilities and spends his free time on the ship honing his combat skills. After Shiro, Keith is easily the best hand-to-hand combatant on the team. His combat skills allowed him to knock three Garrison military doctors out cold with minimal effort and incredible speed. Keith is also physically the fastest of the team, making his way across the battlefield like a blazing meteorite. He is still learning, but he is an impressive and dangerous swordsman who should not be underestimated. He is also surprisingly strong despite his lean frame and his tendency to stress speed over strength in a fight.

Keith is a prodigy pilot who relies more on instinct and natural talent than on learned skill alone. He is the only Paladin capable of handling the Red Lion due to their shared ferocious and rebellious natures. Unlike the others, Keith had to earn his Lion's respect by fighting to protect it at all costs, thus impressing Red. He is a high speed combat specialist who fights at his maximum at all times.

Keith's intense wrath allows him to bypass his normal limits and take opponents like the Quintessence-enhanced Zarkon on even footing, but does leave him in a state of mind that prevents him from making sound decisions. In such a state he becomes manic and feral as he ignores all outside advice and logic, leaving him more open to attack. However, as seen during his battle with the Galra Emperor, Keith's wrath also allows him to connect more deeply with Red, which allows him to manifest previously unknown weaponry similar to how the Bayards react to their respective Paladins. Keith's feral mindset in this state allows him to think and react much faster than normal, turning him into a one-man army. The power unleashed by Red's upgraded cannon was enough to inflict critical damage to Zarkon's central base and large portion of his vast armadas.

Keith is also skilled with explosives and diversionary tactics, as he was able to distract Galaxy Garrison personnel with multiple calculated explosions in order to clear the way to bust Shiro out of quarantine. This shows that despite his typically reckless demeanor and approach that Keith is a capable guerrilla fighter and tactician of considerable skill.

Zarkon has noticed that Keith's natural fighting style resembles that of the Galran's own during their first duel. Indeed, Keith's single-minded drive during battles is reminiscent of the Galra Empire's motto in battle: nothing will stop him but triumph or death. Keith has shown himself to be quickly able to adapt his fighting style to whatever weapon he has on hand, such as his luxite sword. With his ancestral weapon Keith is shown to be adept in not just single edged swords, but also the backsword-styled blade favored by the Galran fighting style, common to both the Galra Empire and The Blade of Marmora.

Keith's Galra heritage allows him to tap into and utilize Galra technology that is specifically encoded to their species, allowing him to infiltrate their bases. His ability to access genetically-encoded Galra tech is what revealed him as human/Galran hybrid.